The Quintessence of Reality: An Interview with LAL Fellow Mohammed Rustom

Two Library of Arabic Literature Fellows, Mohammed Rustom and Bilal Orfali, recently sat down together to discuss the edition and translation projects they’ve been working on this year at NYU Abu Dhabi. Here, Bilal Orfali interviews Mohammed Rustom about his work on ‘Ayn al-Qudat’s Zubdat al-Haqa’iq (The Quintessence of Reality).

Who was ‘Ayn al-Qudat, and why was he so important in the Islamic tradition? 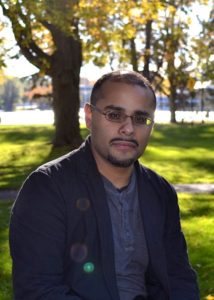 ‘Ayn al-Qudat was a major theologian, philosopher, jurist, and Sufi who died in the middle of the 12th century CE. The Seljuq government had him put to death because he was a critic of their corrupt administrative practices and they feared his influence among his students, many of whom worked for the Seljuqs.

‘Ayn al-Qudat was the disciple of Shaykh Ahmad al-Ghazali, who was of course the brother of the famous Abu Hamid Muhammad al-Ghazali. ‘Ayn al-Qudat is significant because he wrote in both Arabic and Persian, and was equally influential on both the Arabic tradition and the Persian tradition. Many of the important Sufi authors writing in Persian after him were influenced by him, such as Farid al-Din ‘Attar, Jalal al-Din Rumi, and Mahmud Shabistari. They drew on his writings, especially his original discussions on love and the imagery of the lover and the beloved, the moth and the flame, etc. The authors writing in Arabic, such as Ibn ‘Arabi, Nasir al-Din Tusi, and Mulla Sadra were also influenced by his theoretical discussions on God, the nature of knowledge, and the path to acquiring true knowledge.

Among his books is the Zubdat al-Haqa’iq (The Quintessence of Reality) that you are translating and editing for the Library of Arabic Literature. How did you discover this book?

I had seen references to the Quintessence in books by modern scholars, and read a couple of useful articles on it as well. So I was aware of its importance, but when I began to read this book and all of ‘Ayn al-Qudat’s other works, I was able to see what he was doing in the Quintessence that was so unique. There have often been discussions about what text in the Islamic tradition was the first to merge philosophy and Sufism, and people often point to books by Ghazali and sometimes even Avicenna as examples. But it is clear from the Quintessence that this book deserves that honor—it is the first clear-cut exposition of Sufi metaphysics and epistemology, using the language of philosophy and theology. At the same time, ‘Ayn al-Qudat shows how philosophy can help mysticism, and how philosophical methods of argumentation can pave the way for demonstrating the supremacy of mystical knowledge.

But in order to appreciate what ‘Ayn al-Qudat is doing in the Quintessence that is so unique, one has to be familiar with the other works written before him which seem to do the same thing, that is, merge philosophy with mysticism. Compared to the Quintessence, these works, such as the Mishkat al-Anwar (The Niche of Lights) of Ghazali, do not try to present what it is about Sufi metaphysics that makes it so unique. That is, they are not arguments in favor of the science of philosophical Sufism as much as they are particular applications of this science to specific intellectual and text issues and questions.

What are the Quintessence’s most important ideas?

The Quintessence theoretically exposits a number of philosophical and theological doctrines that are characteristic of the later Islamic intellectual tradition. It contains, amongst other things, remarkably lucid expositions of the problem of the eternity of the world; the fact that there is a discernable order of causation in creation, but that God is the only real cause; the manner in which concepts such as “before” and “after” are accidents of time; and how existentiation is a process of continuity, and results from divine self-intellection.

In the Quintessence, ‘Ayn al-Qudat also demonstrates the level of his indebtedness to Ghazali when he argues against the Avicennian notion of God’s inability to know particulars except in a universal way, and the idea that the universe is eternal. ‘Ayn al-Qudat also takes up the familiar line of argumentation in Ashari rational theology against the notion that the divine names are somehow superadded to God’s Essence. He maintains that they inhere in God’s Essence, but in a way that does not make God more than one. Rather, the names are not God and are not not God.

‘Ayn al-Qudat also makes a unique argument for divine simultaneity, which is the view that God is with things but that nothing is with God. All of these discussions are then seamlessly tied into ‘Ayn al-Qudat’s most important argument in the Quintessence (partly taken from Ghazali), namely that the knowledge of the mystic stands beyond the scope of the intellect, and is the result of dhawq or “tasting.” This knowledge is different from normal, rational knowledge, which always keeps God separate and distinct, treating God like an “object” of knowledge. ‘Ayn al-Qudat says that God is not only to be known by the mind, but to be experienced by the heart and tasted by the soul—and the only way this can be done is if one trains one’s mind until it cannot go any further. Then, one has to devote oneself to prayer and the remembrance of God (dhikr) until one attains proximity to God, and can thereby come to have a more intimate knowledge of Him. This is why this kind of special knowledge is called “tasting,” since when you taste something, its reality is made much more clear to you than if you had only theoretical knowledge of it.

How historically significant has the Quintessence been?

The Quintessence was historically very significant. Already within thirty years of ‘Ayn al-Qudat’s death, it was taught in the curriculum at the famous Madrasa Mujahidiyya in Maragha (in Western Iran), and it was therefore read by the many influential scholars who came out of this school, such as Suhrawardi and Fakhr al-Din al-Razi. The great Spanish Sufi Ibn ‘Arabi also cites the Quintessence in one of his works which he wrote when he was still in the Maghrib—this indicates that the Quintessence travelled from Iran to the Maghrib in a very short period of time. We also know that the famous philosopher and scientist Nasir al-Din Tusi translated the Quintessence into Persian, but this text does not seem to have survived. The Quintessence was also influential on later early modern authors, such as ‘Abd al-Ghani al-Nablusi, who also discusses its main ideas, especially the entire question of “tasting” and ‘Ayn al-Qudat’s emphasis on the stage beyond the intellect. Even today, the Quintessence is taught and read in places such as Turkey and Iran.

What can the Quintessence tell us today, as modern readers?

The greatest teaching in this book for modern readers is that they should not feel so sure of the things that they know. This is because the nature and even structure of reality is often very different from what can be known by the human mind. Look at the domain on contemporary physics: you have, on the subatomic level, an entire universe that is hidden to the naked human eye, but which contains the building blocks of our physical world. On that level, the structure of things appears to be quite contrary to what we take for granted as the constitutive “stuff” of the comic order. For example, we think that light has one kind of nature, but quantum mechanics has demonstrated clearly that it can behave like a wave and a particle. Indeed, the entire quantum world shows us how unstable our cosmos is, and it therefore throws our own certainties about the world into question.

This is what ‘Ayn al-Qudat wants to do in the Quintessence, but he does not take recourse to physics: he makes the simple observation that if you want to know what life is all about, the only way you can do it is to hang up your reliance on your own intelligence and try to cultivate humility and a good heart through prayer and invocation. This will allow you to see the underlying structure of things, and will also cause you to fall in love with both the Creator of all things and all things themselves. As I see it, that is the heart of the matter, for there is no greater teaching for our time than the importance of true love and respect for the divine, ourselves, and every other sentient being.

For more discussion, including how Mohammed Rustom chose the title “The Quintessence of Reality,” watch the video below:

« “Some Works Just Capture You”: An Interview with LAL Fellow Bilal Orfali
General Editor Philip Kennedy Profiled in The National »