UAE’s The National recently published a profile of our general editor Philip Kennedy, who was recently awarded the prestigious Sheikh Zayed Book Award for his book Recognition in the Arabic Narrative Tradition (Edinburgh University Press, 2016). The article begins: 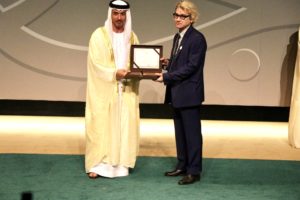 “Writing academic books is a very private affair,” says Philip Kennedy, professor of Middle Eastern and Islamic studies and comparative literature at New York University Abu Dhabi. “I feel lucky when a book is published, lucky if someone in my field notices it and writes a review, lucky if a student takes it up for a class.”

So you can probably imagine how Kennedy felt when he discovered earlier this year – via text message – that he had won a Sheikh Zayed Book Award for his 2016 work, Recognition in the Arabic Narrative: Tradition: Discovery, Deliverance and Delusion. “I thought I was dreaming and then realised I wasn’t,” he says.

« The Quintessence of Reality: An Interview with LAL Fellow Mohammed Rustom
The Story of the Snake: An Excerpt from Stories of Piety and Prayer »