“Some Works Just Capture You”: An Interview with LAL Fellow Bilal Orfali

Two Library of Arabic Literature Fellows, Mohammed Rustom and Bilal Orfali, recently sat down together to discuss the edition and translation projects they’ve been working on this year at NYU Abu Dhabi. Here, Mohammed Rustom interviews Bilal Orfali about his work on the Maqāmāt of al-Hamadhānī and other projects.

What are the books that you are working on for the Library of Arabic Literature?

I just completed with Maurice Pomerantz an edition of al-Hawamil wa-l-shawāmil by al-Tawḥīdī (d. ca. 1023) and Miskawayh (d. 1030) which was translated by Sophia Vasalou and James E. Montgomery. This edition-translation will be published in two volumes in Fall 2019, under the title The Philosopher Responds: An Intellectual Correspondence from the Tenth Century. I am currently working with Ramzi Baalbaki and Maurice Pomerantz on an edition and translation of ʿUqalāʾ al-majānīn of al-Naysābūrī (d. 1014), and with Maurice Pomerantz on an edition and translation of the Maqāmāt of al-Hamadhānī (d. 1008). I have also prepared a short anthology, which is illustrated, from Tanukhī’s (d. 994) works al-Faraj baʿd al-shiddah (Relief after Hardship) and Nishwār al-muḥāḍara (Table Talk) for school children.

From wise fools to beggars and tricksters, tell us more about the Maqāmāt. 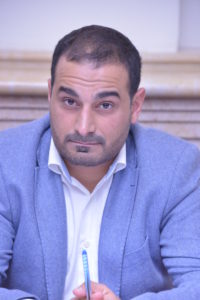 The Maqāmāt, refers to a form of fictional Arabic prose literature that has played an important role in Middle Eastern and global literary history. Invented in Arabic in the 4th/10th century in Eastern Iran, maqāmāt works are collections of picaresque tales that narrate the various adventures of a trickster’s travels across cities of the medieval Islamic world. They cast the exploits and speech of its characters in flowery prose. The tales are often ironic, parodic, and darkly humorous. They often mock aspects of the society or the reader’s knowledge and perception of literature, religion, science, and philosophy. Over the centuries, the genre has exhibited remarkable capacity to travel and transform. Maqāmah writing spread to most regions of the Muslim world and traversed linguistic, religious, and cultural boundaries, as writers composed maqāmāt collections in Persian, Hebrew, Syriac, Ottoman Turkish, and Hausa.

The first person to compose a maqāmah was Badīʿ al-Zamān al-Hamadhānī. In creating the maqāmah form, al-Hamadhānī adapted many pre-existing features of the Arabic courtly literary tradition before him. However the works are innovative in several respects, such as his use of rich textures of rhymed prose that accentuated the speaker’s performances, and the distinctive style of narrative poetics, the maqāmah form.

In the maqāmah of Mosul, for example, a mad healer prophet and his partner ʿĪsā ibn Hishām intervene in a funeral claiming to be able to revive the dead man. In the course of the story, this prophet figure transforms the somber scene of mourning into a comedy where baffled onlookers from the town are seized by the possibility of the miracle. Will this stranger bring the corpse back to life? Is he truly a healer or a prophet? Is the man truly dead?

Those familiar with Hamadhānī’s Maqāmāt will suspect that this stranger is the protean hero Abū l-Fatḥ al-Iskandarī in another disguise. And according to plan, after receiving food and gold from the townspeople, his powers prove unable to revive the corpse. Abū l-Fatḥ and his companion, exposed as frauds, exit the town dodging the slaps and blows of the angry townspeople.

The two heroes then travel to a new location where Abū l-Fatḥ promises to save a group of villagers from an impending flood. Assuming the guise of the prophet Moses, Abū l-Fatḥ commands the villagers to slaughter a golden heifer, and further, asks to deflower one of the village’s virgin girls. The episode comes to a close when, in the midst of the very prayer act that was designed to save the inhabitants from the flood, Abū l-Fatḥ and ʿĪsā flee the scene.  Abū l-Fatḥ describes how he has exchanged his false words for charity at the close of the maqāmah.

One very good reason perhaps is that our colleague Michael Cooperson has completed translating the Maqāmāt of al-Ḥarīrī. But you know, some works just capture you. I first read the Maqāmāt of Hamadhānī as an undergraduate student at the American University of Beirut, and it was love at first sight. Hamadhānī created a text that is in dialogue with most Islamic disciplines, but at the same time the text seems irreverent. Ḥarīrī does something similar, but with him the genre is more fixed. His Maqāmāt are overly concerned with literary form in my opinion. With Hamadhānī you can feel the freshness of the genre, the search for a form, linguistic register, and characters. Ḥarīrī’s text became more popular and enjoyed a rich tradition of commentaries. The text however is more stable—likely because of the large numbers of students who purportedly studied with the author. Hamadhānī’s text on the other hand is a challenge and many questions pertaining to its history remain to be answered.

You are writing a book on the Maqāmāt of al-Hamadhānī—what is the subject of the book?

After several years of working on the text of al-Hamadhānī, Maurice Pomerantz and I recognized that despite the fame and importance of the text, basic questions about the circumstances of the text’s authorship, collection, and transmission still remain to be answered. It is the regrettable common practice in studies and translations of Hamadhānī’s Maqāmāt to refer to the seriously defective “standard” editions of the late 19th century, the best of which is prepared by the esteemed scholar and reformer Muḥammad ʿAbdu. ʿAbdu not only censored the text to meet the norms of a conservative audience but also relied on later Ottoman manuscripts replete with errors. Relying on these defective editions not only compromises the results of modern scholars’ investigations of Hamadhānī’s text, but also prevents them from appreciating the literary culture that created this work. How were the individual maqāmāt composed? How were they performed? How were they recorded, lost, found, collected, and transmitted? How did they gain their titles and various readership notes and commentaries? These are only some of the questions that our book addresses.

To see Bilal Orfali discuss more of his projects, watch the video below:

« General Editor Philip Kennedy Reads from Consorts of the Caliphs
The Quintessence of Reality: An Interview with LAL Fellow Mohammed Rustom »