“His voice really speaks to us directly now”: Tahera Qutbuddin on translating the iconic Mutanabbī 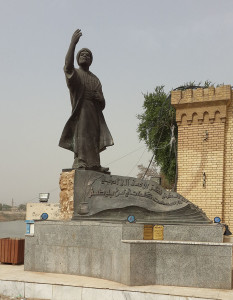 Is it possible to make English-language poetry readers fall in love with Mutanabbī in English translation? The Library of Arabic Literature has unveiled an ambitious project to make all of Mutanabbī’s verse available in beautiful, poetic English:

What if there was no Shakespeare in Arabic?

There is, indeed, a great deal of Shakespeare—and Shakespeare-inspired work—that’s been written and staged in Arabic. But flip the microscope, and there is relatively little of Arabic’s most iconic classical poet in English. And his impact on English-language poetry has been very small indeed.

The translators all found the sections of Mutanabbī difficult to render, but all had different opinions on translating a large chunk of his oeuvre.

Wright was skeptical, saying that the fact that so little of Mutanabbī’s work has been translated to date “suggests that in the end it’s impossible to do it in a way that non-specialist readers would ever appreciate.”

Romaine was more positive about the idea: “Mutanabbī is so enormously important to the turāth [Arab cultural heritage], and the West has become so much more curious in recent years about the Arab and Islamic world, that to enable more global exposure/access to this particular aspect of that world would seem to me an endeavor all to the good.”

Booth was the most enthusiastic: “Yes, I definitely think his oeuvre could be wonderfully translated for our moment, and should be. I’d love to see someone do that.”

“The sentiments in his poetry and the careful, sparse formulation of images, are breathtaking and fresh,” Booth said.

Davies, who has since managed to bring Aḥmad Fāris al-Shidyāq’s Leg over Leg into beautiful English, was perhaps rolling his eyes as he answered: “I think everything can be translated or nothing can be translated. Either of those two positions is logical, anything in between illogical. If you ask ‘Can Mutanabbī be translated?’ you have to be prepared to ask, ‘Can Bashshar ibn Burd be translated, can Adonis, can Naguib Mahfouz, can the newspaper, can can can?’ since Mutanabbī is not different in essence from any other writer[.]”

At this year’s American Oriental Studies (AOS) meeting, held March 18-21, the Library of Arabic Literature (LAL) board announced that they will begin collaboratively translating “all of Mutanabbī,” led by LAL board member Tahera Qutbuddin, assisted by fellow board member Devin Stewart, with LAL Executive Editor James Montgomery acting as a project editor, and Richard Sieburth as a poetic adviser. It’s a style already pioneered with their translation of Ibn al-Sāʿī’s Consorts of the Caliphs, a project led by Shawkat Toorawa and Julia Bray, and the Dīwān ʿAntarah, a group-translation project led by James Montgomery.

Tahera Qutbuddin, Associate Professor of Arabic Literature at the University of Chicago, said she hopes to have the first LAL volume of Mutanabbī’s work out in four to five years. Qutbuddin sat down with Marcia Lynx Qualey during the conference to discuss this tremendously ambitious project.

When LAL executive editor Shawkat Toorawa says you’re now in charge of a project to translate “all of Mutanabbī,” how much poetry will the group be translating?

“All of Mutanabbī” is a little over 5000 verses. The diwan is very large. In different iterations it’s in one volume or two volumes or four volumes, depending on how much commentary you get, the format, and so on.

Where will you start?

I think we can divide his poems into four distinct parts: The first is his early poems, which he started composing when he was about 12 years old. He was a child prodigy—he started speaking and poems came out of his mouth, and everyone went gaga over him. Be that as it may, his style did gain strength and mature as he went on.

The next group are called the Syrian poems, or the Aleppan poems, or the Shāmiyyāt. They’re also called the Sayfiyyāt, and that’s how they’re best-known, as they were composed at the court of Sayf al-Dawla. Many of them are in praise of him, and they include some of Mutanabbī’s best-known poems.

The next two are the Kāfūriyyāt, so-called because they were written at the court of Abū l-Misk Kāfūr in Egypt, and the final poems, written after he left the court of Kāfūr.

So: Shall we start with the Sayfiyyāt or the Kāfūriyyāt?

The reason we decided not to start with the Kāfūriyyāt is that these poems contain some really strong invective, and he lampoons Kāfūr in a particularly vicious, racist manner. Although it could be a teaching moment, and it will be, we thought, let’s start with the Sayfiyyāt. And then we will do the Kāfūriyyāt, and the final poems, and the poems from his childhood. That’s the twenty-year projection.

Currently we’re planning to start with the Sayfiyyāt, which is approximately 1700 verses.

You’ll start working in earnest in May?

We did have one trial workshop last December in Abu Dhabi. Each team did the same poem, one that was translated earlier by A.J. Arberry. I passed that around beforehand along with commentary. We divided into teams, and we each did the same exact poem, just to see if it was a feasible project, to see whether people were enjoying it.

When I first proposed this, the responses were very skeptical. There are so many challenges, and readers are going to complain that it’s really not like the original. And it won’t be.

Why does Mutanabbī pose more of a challenge—in some ways, in many ways—than translating ʿAntarah? Because his poetry is really dependent on techniques very distinct to Arabic. Word play, the acoustic makeup, the acoustic effects. How do you transfer them across languages?

Mutanabbī’s poems can be really powerful in Arabic because of the makeup of the words in addition to the image. The image I can transfer more easily, but the linguistic effects, less so. And without them, it’s going to fall flat.

But in our workshop, we did have some interesting renderings. People found ways to articulate the poems, in English, using all kinds of different English techniques.

Will people in the group be reading more English poetry, to help imagine new ways of rendering these poems in English?

I know many among the group already do. I don’t. I love Arabic poetry, but right now I don’t read a lot of English poetry. I did in my youth, I enjoyed it—I loved William Wordsworth and John Milton. But [poet and translator] Richard Sieburth has agreed to participate, as he did with ʿAntarah.

Once the group translation part for ʿAntarah was completed, James went back and did a lot of work unifying the voice. And then we sent it to Richard, and Richard came back with a lot of suggestions and edits. We’re hoping to do that with this volume, too, and hopefully Richard can attend these workshops, too. 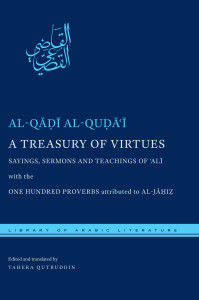 Does the facing-page format allow you to depart from a strictly “faithful” translation?

That’s the beauty of having the Arabic there. This is not a primer. It can be used to understand the Arabic, but the fact that you have the Arabic there frees you from having to stick to a very strict literal rendering. You can interpret rather than translate ploddingly word by word by word.

One thing that I’ve really learned in the two volumes that I’ve finished for LAL—on aphorisms of the Prophet Muḥammad and Imam ʿAlī—is that literal translation is the worst disservice you can do to a text. You have to understand what the author wanted to say and then say it, forcefully, in the target language.

So how big a deal is Mutanabbī?

A few years ago, I Googled him, and there are bookstores and streets named after him. You’d expect that. But there are also festivals, even ships. He’s such an icon, not only of Arabic poetry, but of Arabic culture, and Arabness. Part of why people relate to him is his poetry, but part of it is they see him as the ideal Arab. Eloquent. Brave. Willing to sacrifice for the sake of honor.

It’s a winning combination—the aesthetic qualities of his poetry are unmatched, and his life is also so interesting.

Will there be something about his life in the volumes?

Beatrice Gruendler had asked, during the AOS meeting, about whether there would be commentaries on the poetry interleaved throughout the volumes. But this will be just the poems standing on their own?

We want it to be read as a book of poetry.

We also want to have the academic apparatus, perhaps including some commentary, but that can go online.

So if I go to the bookstore and I want to buy this, I’ll find it in the poetry section.

There are multiple audiences for this as for all of our books, but really we want to pitch it as poetry.

These are our unwritten rules. In the introduction, we do want to talk about our translation approach. Particularly because this is an unusual way of doing this. I don’t think in our field there have been collaborative translations of poetry like this. Hopefully it’ll encourage a lot more collaborative work in the future. Because it’s just better.

Everyone has described you as the long-time champion of this project. What is the personal motivation?

I didn’t grow up with Mutanabbī in the same way as I grew up with the sayings of Muḥammad and ʿAlī. I started studying Arabic at Ain Shams University, and I probably just encountered lines of Mutanabbī here and there, cited in books of various kinds, and quoted by folks from time to time, and I finally just bought a copy of his diwan. I used to have a diary where I wrote down words from any poet that I loved, and Mutanabbī really dominated. You come across a verse that is just pure genius and you say, this can only be Mutanabbī.

I’ve read Mutanabbī over and over, and I’ve read more and more of him. I particularly love his ḥikmah verses. Even though he wrote for his audience a thousand years ago, I think his voice really speaks to us directly now.

Mutanabbī’s verse was so personal. His personality really comes through in the poems. Whether he’s panegyrizing Sayf al-Dawla or he’s slamming Kāfūr, in the end it’s about him. You get his loves, his hates, his prejudices. You also get his anxieties, his struggles, with physical ailments and psychological pressures. You get all of that in a very personal voice.

I almost feel I know Mutanabbī through his poetry.

Will this be a game-changer in how people view Arabic literature and Arabic poetry in English?

I hope so. I think already with the ʿAntarah, I see that as a game-changer.

Mutanabbī is just so big. He has been translated. Not the whole of the oeuvre, and not big chunks of it, but individual poems.

What we’re aiming to do that’s new and different is we want to start systematically translating all of his poetry. That’s part of it. The other part is what we’ve discussed—most of the Mutanabbī poems in translation are conceived of in a different fashion.

It’s been so many years getting to this point. LAL conceives of itself as a corpus, rather than a canon. But we can’t call ourselves the Library of Arabic Literature and not have Mutanabbī.

« Forthcoming from LAL: A 19th-century traveler’s account of Sudan, a popular medieval cookbook, 101 Nights, and more
Another feather in the cap for Saq ‘ala Saq! »