Forthcoming from LAL: A 19th-century traveler’s account of Sudan, a popular medieval cookbook, 101 Nights, and more 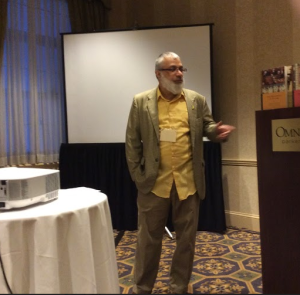 At this year’s American Oriental Studies meeting (March 18-21), the Library of Arabic Literature revealed a dozen new titles that we can expect from the project in the coming years:

LAL General Editor Philip Kennedy opened the panel by saying that the Library’s “corpus, not a canon” mantra has acquired a question mark. But he held to the idea that the LAL project is “not remaking the canon.”

Indeed, the LAL list remains self-consciously eclectic, with some works that clearly have been handed down with reverence in a canon-like manner, such as Mutanabbī’s al-Sayfiyyāt, yet others that may have been popular in their time but later fell into an un-canon-like obscurity, such as Ibn al-Sa’i’s Consorts of the Caliphs.

While Executive Editor Shawkat Toorawa noted that the board’s expertise “by and large tends to be pre-1450,” it’s clear that the project isn’t just translating the classic classics, but also works from the sixteenth through early twentieth centuries.

A brief look at a few of the forthcoming book-projects:

This volume, currently titled Scents and Flavors that the Banqueter Savors was, the LAL literature notes, one of the most popular cookbooks of the Arabic Middle Ages.

One of the questions that followed the LAL panel at AOS was: Has it been taste-tested?

“Yes!” Toorawa said. “The translator has cooked every single item in the book.” But more than that, he said, ordinary cooks were going through the recipes to “make sure they are actually usable by someone who wants to just cook a recipe.”

“It passed scholarly review, and the cook-translator-editor has made them, so he understands them. But if you give them to a complete stranger,” that person also has to be able to make the recipes, Toorawa said. “It’s meant to be a recipe. Recipes have to be usable.”

The cookbook will first appear in LAL’s traditional Arabic-English facing-page format, but may later appear with color photographs in an English-only edition.

The Fihrist, a comprehensive listing of books by a tenth-century Baghdad bookseller, will be edited and translated in a new project headed up by LAL board member Devin Stewart and collaboratively and collectively translated by members of the LAL board.

Stewart spoke at the AOS meeting about editions and translations of the Fihrist, noting that “if you look at the details [of the manuscript tradition], it seems something like a comedy of errors.”

This comedy “started in the middle of the 19th century when Gustav Flügel published a summary of the contents of the Fihrist, which he’d found out from colleagues in France. And he made it his major project to work on the Fihrist. It didn’t get published until after he died in 1870. And then that became the standard edition for a while, until [Hellmut] Ritter went to Istanbul, and he found new manuscripts that were better than the ones Flügel had used. So then Johann Fück decided he was going to do a new edition of the Fihrist. And he thought he was done, or very close to being done, right at the outbreak of the Second World War.

“And then what happened is they found some more manuscripts, and they realized, ‘Oh no, we have to go back and do it again.’”

“So Fück worked on it for a long time, but publication never happened. The next major event was in 1970, when [Bayard] Dodge published his translation of the Fihrist, which, as you know, has many problems, but was based on the oldest manuscripts. And in Iran, they also published an edition, also based on the earliest manuscripts.

“Then, in 1989, a Russian scholar Valery Polosin pointed out something very important: that the editions so far were mixed. Meaning that he realized that the tradition of Ibn al-Nadīm’s text had been contaminated, mainly by interpolations of a later scholar, and those got into the manuscript, and people were using all of the manuscripts, which put together the originals of Ibn al-Nadīm’s text with the interpolations without really distinguishing them. So that created some problems. There were dates in there that were later than Ibn al-Nadīm’s death.”

“Then recently Ayman Fuʾād Sayyid published a new edition, which is based on the earliest manuscripts and not the other ones, so it gets rid of this problem of contamination.”

Fuʾād Sayyid also did other things to improve the edition: There is a gap at the middle of the available manuscripts, Stewart said, and Fu’ād Sayyid worked hard to fill it in, although it remained incomplete. He also preserved the “weird and amazing” layout of the original text.

However, Fu’ād Sayyid’s edition doesn’t do some things, Stewart said. It doesn’t use Polosin’s book or Dodge’s translation. Although Dodge’s translation did have a number of errors, Stewart said, Dodge also did a lot of work on identifying people and places. “For example, there’s an entry on Theodorus, and Dodge points out and this actually is Theodosius.”

This new edition, Stewart said, “will try to use everything that’s been done so far on the Fihrist.” It will also seriously approach the problem areas in the text. Some of these, he said, “you could attribute to ibn al-Nadīm. Some must have happened in between Ibn al-Nadīm and the current manuscripts that we have.”

The group, he said, will probably work on a volume covering law and theology first.

Dīwān ʿAntarah is another of the LAL’s collective projects, headed up this time by LAL Executive Editor James Montgomery. Although Montgomery wasn’t in attendance at AOS, during her talk, LAL’s Tahera Qutbuddin said that the new ʿAntarah translation—of the verse of the pre-Islamic warrior poet—had been greatly improved by the process of collaborative translation.

It “started out in a very interesting way,” she said, “but it’s been through stages, and the way it is now is exactly where I want our Mutanabbī project to be. I find it lovely.”

Toorawa introduced Qutbuddin by saying that “she is now in charge of a project to translate, yes, all of Mutanabbī.”

A daunting task, to be certain, and one Qutbuddin discusses in more depth in a forthcoming interview. At the AOS meeting, she noted the importance of translating Mutanabbī. “As much as we say ‘a corpus, not a canon,’ I think we can’t be the Library of Arabic Literature without Mutanabbī.”

“What’s really frightening,” Qutbuddin said, “is how to render this icon of Arabic poetry and literature into a meter that reads as poetry and not as a crib of the Arabic.”

This translation, she said, would be “for people who are not Mutanabbiphiles—they can read it in English and still fall in love with Mutanabbī.”

“We weren’t ready, five years ago, to take on this project.” But now, Qutbuddin said, they are. “In the past five years, we’ve done a few collaborative translations. Ibn al-Sāʿī’s Consorts of the Caliphs and also the Dīwān ʿAntarah. In that process, in those five years, we’ve met twice a year for board meetings in Abu Dhabi and New York, and each time we’ve tacked on a workshop or a series of workshops. So we’ve workshopped these projects and we’ve developed a framework and a method.”

Kitāb Miʾat Laylah wa-Laylah: ‘You Had To Do Something With It’

Fudge was asked, after his talk, about how all this applies to his translation of A Hundred and One Nights. He answered that he “could definitely feel that the Arabic was just too bare” in the Hundred and One as well. “You had to do something with it, and it was a question of what to do with it.”

“The intertextual element is so huge,” he added. “And it’s really difficult to render.”

A text on the limits and validity of Sufism.

A defense of traditional Arabic virtues and fields of knowledge in response to the Persian Shuʿūbiyyah.

Epistles on theology by the “Father of Arabic Prose.”

A compilation of the sayings of the Prophet Muhammad.

A mocking “literary analysis” of rustic verse from 17th-century Egypt.

A 19th-century traveler’s account of the kingdom of Darfur, Sudan.