Another feather in the cap for Saq ‘ala Saq! 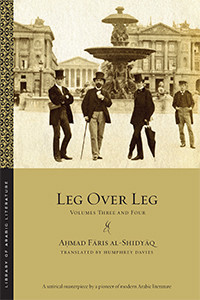 Tarek El-Ariss, Associate Professor of Arabic and Comparative Literature at the University of Texas-Austin, rains praise on Humphrey Davies’ translation of Leg over Leg, naming it “a feat, a symphony, a musique contemporaine that gives life to al-Shidyaq’s text and moves the contemporary reader to the core”:

“Presented as an en-face, bilingual translation in four volumes, Leg over Leg captures al-Shidyaq’s humor, excess, and outrageousness. Davies boldly and tirelessly brings the English reader closer to the text’s linguistic play, fascination with words, and deconstruction of the rules of writing. The libertinage of al-Shidyaq’s language and literary performances comes to life with the main character, al-Fariyaq (Faris + Shidyaq = Fari-Yaq), as he travels across Europe and the Middle East, mocks and parodies political and religious authority, interprets dreams, cures bad breath, and translates and writes official reports for the British administration of the island of Malta. Al-Shidyaq relates the episodes, encounters, trials, and tribulations of al-Fariyaq, then digresses and goes on for pages listing words depicting culinary dishes or sexual organs, describing their different states, putting them into music and sound as if to inscribe them in the language and the cultural imaginary of the reader. Al-Shidyaq’s mixing of genres performs literary virtuosity yet undermines the very authority of the literary. As Rebecca Johnson writes in her excellent foreword to Davies’s translation, “Language itself is the key to dissidence” (1:xxviii). 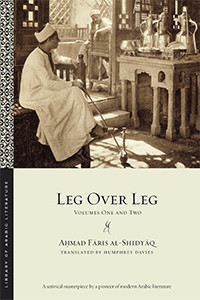 Mimicking the author’s practice, Davies was required to turn to Fairuzabadi’s and Ibn Manzur’s lexicons, both available online, in order to translate Saq. Starting with a scientific and lexicological act of collecting and listing words, the translation process extends to an act of listening and capturing different rhythms and sounds, heeding the call of the text, “Gently! Hush! Silence! Quiet! Cock an ear! Listen up! Hold your tongue! Quit talking! Hear! Hark! Hearken!” (1:37). And thus begins Saq, as if to make room for a musical performance in which the audience needs to listen but also suspend judgment, fasten their seatbelts, and expect something new, bizarre, and scary, for al-Shidyaq will take them on a journey, a trip on the stage of fiction. The experience of listening, watching, and reading is essential to the work’s unfolding. Davies takes up al-Shidyaq’s challenge and listens to the sounds and reproduces them as musical notes, phonemes, guttural sounds: “Bletch! Bletch!,” “Yetch! Yetch!,” “Retch! Retch!,” “Ptui! Ptui” (1:59). Davies translates by upholding the untranslatable. The outcome is a feat, a symphony, a musique contemporaine that gives life to al-Shidyaq’s text and moves the contemporary reader to the core… By allowing al-Shidyaq’s language to proliferate, echo, and travel, Davies’s translation encapsulates Saq’s modernity through play, sound, and rupture. NYU Press’s Library of Arabic Literature provides the stage for this performance. This edition, with its foreword, footnotes, glossaries, and beautiful font and organization, is made for expert and non-expert alike. The end result is a literary treasure and a feast for the senses.”

« “His voice really speaks to us directly now”: Tahera Qutbuddin on translating the iconic Mutanabbī
Islamic Sciences calls The Principles of Sufism a “rare feast”! »