LAL presents: “The other Arabian Nights” 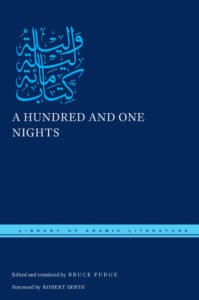 In today’s The National, editor-translator Bruce Fudge talks about his just-published collection of wondrous tales known as A Hundred and One Nights—the less-renowned, purportedly older, sibling of A Thousand and One Nights—which features an almost entirely different set of stories, each one more thrilling, amusing, and disturbing than the last:

“”There are actually many many story collections like the Nights from the pre-modern Arab world, libraries in Europe and the Middle East contain untold numbers of neglected manuscripts, but almost everything we know about pre-modern Arab literature comes from the ulema, the scholarly class of the litterateur or religious scholars who were largely writing to and for each other. What we have here is Arabs telling each other stories and a side of Arab literary life that we don’t know so much about but that is much more accessible.“

That accessibility is central to Fudge’s translation of A Hundred and One Nights into English as well as his new edition of the original Arabic text. His aim, he insists, is to bring the literature to a wider audience and, with its concise collection of 18 tales, most of which are new to us, and clearer, more convincing narratives, A Hundred and One Nights has every chance of success.”

Check out the full article here to read about A Hundred and One Nights‘ obscure provenance, its symbiotic relationship with A Thousand and One Nights, and its import to the classical Arabic literary tradition at large.