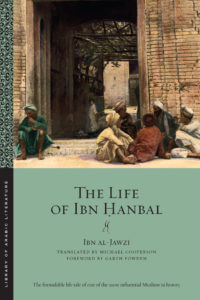 Next week is an eventful one for LAL! Three new and exciting titles will make their way out into the world—one hardcover and two English-only paperbacks, respectively:

Risible Rhymes, written in the 17th century, is a series of disquisitions on verse of different genres (mock-rural couplets, riddling poems, a line of al-Mutanabbī’s) showcasing the critical interest in wordplay, grammar and stylistics that characterize this little-known period of Arabic literature. The special attention it devotes to mocking the pretensions of uneducated poets from Egypt’s countryside make it a companion piece to Yūsuf al-Shirbīnī’s Brains Confounded (also translated by Humphrey Davies), written some forty years later.

A Treasury of Virtues: Sayings, Sermons, and Teachings of Ali, with the One Hundred is a collection of sayings, sermons, and teachings attributed to Ali ibn Abi Talib (d. 40 H/661 AD), the cousin and son-in-law of the Prophet Muhammad, the first Shia Imam and the fourth Sunni Caliph. Compiled by Fatimid Shafi’i judge al-Quda’i (d. 454 H/1062 AD), and translated by Tahera Qutbuddin, it arguably possesses the broadest compass of genres and the largest variety of themes, including aphorisms, proverbs, sermons, speeches, homilies, prayers, letters, dialogues, and verse, all providing instruction on how to be a morally upstanding human being.

The Life of Ibn Hanbal is a translation of the biography of Ibn Hanbal by the Baghdad preacher, scholar, and storyteller Ibn al-Jawzi (d. 597 H/1200 AD), newly abridged for a paperback readership by translator Michael Cooperson. Set against the background of fierce debates over the role of reason and the basis of legitimate government, it tells the formidable life tale of one of the most influential Muslims in history.

If you haven’t already, make sure to order your copies now!

« LAL presents: “The other Arabian Nights”
Leg over Leg is shortlisted for the National Translation Award 2016! »