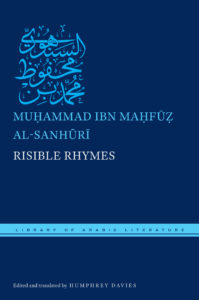 Humphrey Davies, a multi-award-winning translator who works with Arabic literature from the Ottoman period to present, first read Yūsuf al-Shirbīnī’s seventeenth-century Brains Confounded by the Ode of Abū Shadūf Expounded in the early 1970s. Since then Davies has “only come to further appreciate his originality in inverting and subverting the literary practices of the time.”

Brains Confounded borrows from a wide variety of Arabic literary traditions and includes one-liners, anecdotes, accounts of adventure, and verse—both “high” and “low.” Al-Shirbīnī presents mock-rural poems and subjects them to an over-the-top grammatical analysis. These rural poems may have been borrowed from a slightly earlier work by Muḥammad ibn Maḥfūẓ al-Sanhūrī, which Davies has just translated as Risible Rhymes, or both may have been borrowed from a stock of mock-rural verse in common circulation.

In the first part of an interview about the two seventeenth-century texts—al-Sanhūrī’s Risible Rhymes and al-Shirbīnī’s later Brains Confounded by the Ode of Abū Shādūf Expounded—Davies talked with M. Lynx Qualey about why he values Brains Confounded, how his reading of it has changed since the 1970s, the connections he makes between al-Shirbīnī and Aḥmad Fāris al-Shidyāq, and more.

This second part addresses the relationship between the two texts, what we do (and don’t) know about real rural verse in seventeenth-century Egypt, and what scholars, readers, and writers can learn from Brains Confounded.

Did you have a favorite moment in Brains Confounded?

HD: Many, but here are a couple. A peasant goes to the city to pay his master his taxes. He’s put up overnight in a room overlooking his master’s bedroom and observes him making elegant love to his wife, summoning her to his bed by tossing a rose at her. Back in the village, the peasant decides to recreate the scene with his own wife. Finding a brick to hand, he decides to summon her to his bed and… And al-Shirbīnī tells a story that happened to him personally, about how he was inveigled into attending a gathering of heretical and depraved dervishes and escapes by saying he has to go to the lavatory and climbing out of the lavatory window into a cesspool. In the street, he runs into a police officer who was actually an in-law of his, who arrests the miscreants. It’s impossible to know if that happened, of course, though one notes that a variant of the story appears again elsewhere in the book without any mention of the author’s involvement, but the point is that he lives these stories so intensely that he could imagine himself being personally involved, down to the clinching detail about the police officer.

What do we know about genuine rural verse from this era (if anything?) Is this like trying to understand country lyrics by looking at mock country lyrics?

HD: The comparison is apt. I don’t think we have any examples of genuine rural verse from earlier than the second half of the nineteenth century, by which time the mawwal and the epic ballads of the Bani Hilal seem to predominate. Elements of both of those can be glimpsed in the verse that al-Shirbīnī calls rural, but I still have the feeling that what he offers us is so thoroughly bent to his purposes, or to those of the satirical genre to which they belong, that it’s not possible to reconstruct the originals from it. And another possibility just now occurs to me: I argue in my introduction that the peasants in al-Shirbīnī’s eyes are a surrogate for the great unwashed as a whole, so by the same token maybe the verses he attributes to them do not have specifically rural underliers.

If we say that he borrowed from popular stories in the tradition of the Nights, is this a fusion between high and low forms, despite the author’s allegiance to refined letters?

HD: It is, and that fusion is a characteristic of the book—it calls on many different genres: stories from a variety of traditions, one-liners, anecdotes that must have been current in his day, accounts of adventures that befell the author himself (or so he claims), verse of all kinds from the “highest” to the “lowest.” He casts his net much wider than did most writers of adab or belles lettres, and that is perhaps because he had a specific task that both required him to appeal to a wide audience and that allowed him to be more catholic in his choice of material. But, in the end, these functional explanations fail to explain, as they always must, the genius of the individual author.

Reading the overlap between Brains Confounded and Risible Rhymes, is there any similarity between that era and this one, where there is a rising anonymity among meme-creators, and what’s important is less the originator of the jokes, but the compilers and list-makers?

HD: We may still find out more about how these mock-rural verses were generated. Obviously, as some are found in both al-Shirbīnī’s book and the earlier work by al-Sanhūrī, those at least can’t be by al-Shirbīnī, as he was writing well after al-Sanhūrī. Did al-Sanhūrī make them up, or were they both drawing on a larger stock of such material? Who was the meme-maker? Maybe we’ll never know. It is however obvious that the memes mean nothing without their interpreters: consider how different the approaches of each of these writers is to the material. Al-Sanhūrī treats it rather prosaically, as mere fodder for his “look-how-silly-these-verses-are” theme. Al-Shirbīnī invests them with meaning and makes them the very epitome of all that is wrong with the countryside.

So these two works (Brains Confounded and Risible Rhymes) may be unique or they may belong to a larger corpus of mock-rural verse. Which do you find more likely?

HD: I can’t make up my mind. I will admit to a hope, though: that they are the tip of an iceberg, and that more such works will be discovered in due course. That’s the more interesting scenario.

Which different sorts of readers do you hope to reach with (or do you think might enjoy) Brains Confounded vs. Risible Rhymes?

HD: Al-Shirbīnī: anyone who’s seeking a non-politically correct voice from a literature that sometimes seems preoccupied with confirmation and consensus (even though, paradoxically, the work was intended to promote a particular consensus). Al-Sanhūrī: scholars and historians of literature and ideas who are interested in the concerns of the literary culture of his day.

What things might a novelist mine out of the text, a literary scholar, a historian, a linguist, a religious scholar? What would you like to see happen next in the discussion in and around Brains Confounded?

HD: The literary scholar: material that may change their perception of the practice and purpose of literature in 17th century Egypt. The historian: clues as to how the countryside really worked in that time. The novelist: an older Arab voice that is unexpectedly modern in some ways. The linguist: a rich source of pre-modern Egyptian colloquial Arabic, as well as an example of how language levels can be manipulated in a work of literature. The religious scholar: well, I find it difficult to put myself in their slippers, so they can find what they like (they might wish to begin with the anecdotes about the Sufis who promoted cannibalism and sodomy, but that’s just a suggestion).

As to further discussion, well, further discussion. Musawi’s accolade aside, and a few perceptive articles since the 1970s such as those by Gabriel Baer, Geert Jan van Gelder, and Mohamed-Salah Omri, it has received little scholarly attention and, until ten years ago, it was very hard for the general reader to find a copy in Arabic, let alone in translation.

Risible Rhymes begins with mock country verse—including, as you note, some of the same mock verse as in the much different Brains Confounded. After that Risible Rhymes moves very quickly to the commonly accepted greats of the tradition, which seems a bit like mocking fake country music and then following that up with some Shakespeare and Donne. What does he achieve with this juxtaposition, assuming we already knew that al-Mutanabbi was superior to silly verse making fun of villagers?

HD: Risible Rhymes is a hodge-podge—there are the mock-rural verses, then a section on puzzle poems of various kinds (a much loved genre at the time, but not one that lent itself to the production of immortal verse) and anecdotes about the use of well-known poems to convey coded messages, and finally the extended analysis of a single hemistich of a poem al-Mutanabbi, one of the greatest of all poets. The common factor is the celebration of a shared verse-based culture, which is achieved through the confirmation of what is meant by good taste (via the condemnation of the bad “rural” verse), the genteel pleasure of guessing riddles whose answers can only be known to those steeped in the culture, and, finally, the enjoyment of the cut-and-thrust of a good literary debate and of watching the critics of the day skewer one another with a finely cut hair.

« Catching the joke on its wing: Humphrey Davies on Brains Confounded and Risible Rhymes (Part One)
Event reminder: LAL in Abu Dhabi tonight! »