The Library of Arabic Literature and cultural diplomacy: Follow the motifs 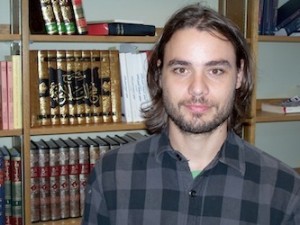 The sixth and final session of “A Corpus Not a Canon: A Workshop on the Library of Arabic Literature,” a panel series hosted by Dame Marina Warner and LAL General Editor Philip Kennedy at All Souls College, Oxford, in April, focused on the “LAL contribution to cultural diplomacy.” Wen-chin Ouyang and Chip Rossetti led a discussion with Mohamed-Salah Omri, Sean W. Anthony, Julia Bray, and Robert Irwin. The books in focus were The Expeditions, by Maʿmar ibn Rāshid, edited and translated by Anthony, and A Treasury of Virtues, by al-Qāḍī al-Quḍāʿī, edited and translated by Tahera Qutbuddin.

Panelists on the LAL workshop’s “graveyard shift,” as novelist Robert Irwin called it, discussed several different types of cultural diplomacy: “traveling motifs” that link Arabic literature with other literary and intellectual traditions; the LAL’s role in making links within the tradition; and how LAL editors and other scholars can approach a foreign tradition with diplomacy.

Along the way, the panel got a bit bogged down in details of how to extend the translated texts’ reach: how to attract more reviews or review-essays; how to get involved in more festivals; how to place more books in libraries and bookshops. Near the end of the final discussion, Marina Warner brought the group back to the basics of forging cultural links.

“It’s obviously very desirable to have single reviews or review-essays on several titles,” Warner said. “But what is perhaps more manageable is that these books circulate into the lingua franca of critical thinking, and therefore allusions come naturally to other essays, and naturally to conversation. In the same way as one might laugh about something being Chaucerian, one might think [of a certain style as] Shidyaqian.”

“Fariyāq,” the hero of Aḥmad Fāris al-Shidyāq’s Leg over Leg, “might become a figure that’s a known type.”

A library of traveling motifs

Julia Bray spoke in particular about the Library’s role in collecting “traveling motifs” as part of forging or highlighting links between traditions.

“One of the ways in which the Library is an act of cultural diplomacy is that it introduces texts or rather motifs — and lots of our texts are made up of smaller texts — and those texts are essentially traveling motifs,” Bray said. “We find them in contexts where we don’t usually expect them.”

Sean Anthony had read aloud an account of the meeting between Emperor Heraclius’s and Abu Sufyan, wherein the seventh-century Byzantine emperor interviewed the Meccan elder about the prophet Muhammad. Bray brought us back to this anecdote as one of the traveling motifs that the LAL could highlight: a moment of intersection with other traditions.

This functions both as an act of cultural diplomacy, Bray said, and as an essential part of reading. “I think that we are only half-reading as long as we don’t have that capacity to draw together the travels of these motifs.”

“I think horizontally,” he said. “And one of the interesting things [when] we think about cultural diplomacy is the horizontal relationship of Arabic to the surrounding cultures and literary traditions that it constantly engages with.”

It’s important to understand Arabic, he said, “not as a language of exclusion, or of a religion, or of a tradition, or of a people that is somehow foreign and uninviting. But rather the real power of the Arabic language is that it’s this language of inclusion.” This tradition, he said, evinces an “almost irresistible pull of many cultures, many themes, and many stories.”

Irwin talked, as a reviewer and editor, about the possibilities of also forging comparative and imaginative links between different traditions. “With Consorts of the Caliphs, yes I know someone who’s written about geisha culture, and I think it might be fun — this person knows nothing about Arabic literature — but [the perspective] might be interesting.”

During his presentation, Mohamed-Salah Omri spoke about himself as a “multiple implied reader” for the LAL volumes: as a teacher, as a native speaker, and as a scholar. The project, he said, doesn’t just create links between Arabic and English traditions, but also between different parts of the Arabic tradition. “A lot of these texts are no longer available in this particular format, edited and combed through [in the Arabic],” al-Omri said. “That’s amazingly useful to me, and useful for people in the Arab world.”

Bringing these texts together, and juxtaposing the nineteenth-century ones like Leg over Leg with earlier works, also creates links between different parts of the Arabic literary tradition. “I’m a specialist of modern and a little bit of pre-modern Arabic literature,” Omri said. So Leg over Leg “is a proper bridge for me that allows me to link the two.”

As a translator, Omri also wanted to make use of the LAL’s translational discussions as a sort of translators’ diplomacy. “I look at this, and my first suggestion is finding a way of compiling and making visible the amazing work that has been in debate about translation—between practitioners and academics in LAL, to have it somewhere available for everybody to see.”

“That itself is a corpus for a lot of research,” Omri said.

Approaching the tradition with diplomacy

Anthony also talked about a different sort of diplomacy: that exercised by scholars when approaching the Arabic tradition. Anthony, who edited and translated The Expeditions, an early biography of Muhammad, expressed some anxiety about doing so as a non-believer. “I approach the text as someone who doesn’t believe, but as someone who has a deep love for and admiration for the central character and central personality.”

Anthony said it was important for him, on a personal level, to reflect on how this translational work impacted his stepdaughters, who are Muslims. This, he said, was a microcosm for the respect of how outsider-scholars could approach the tradition. “I’m very conscious of the work that I do and its impact on my loved ones.”

Anthony talked about a show of “admiration and respect” being part of the LAL’s “dedication to a tradition that maybe we’re not a part of. We’re part of our own tradition, but we can still interact in very diplomatic ways.”

« Times Higher Education’s Summer Reads recommends Leg Over Leg!
In the footsteps of powerful slave and free women of Baghdad: Shawkat Toorawa on Consorts of the Caliphs (Part 1) »