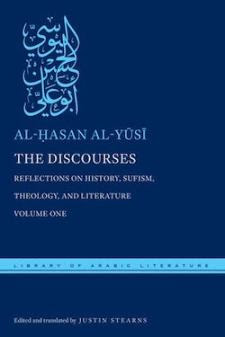 The peripatetic al-Ḥasan al-Yūsī was in his fifties, and arguably the most influential and well-known Moroccan intellectual of his generation, when he found himself sent by Moulay Ismāʿīl to live near the ruins of the Dilāʾ Sufi lodge. It was in this moment, when he was under quasi–house arrest by Morocco’s second Alawite ruler, that the scholar set down The Discourses, the first volume of which has now been edited and translated to English as a “labor of love” by Justin Stearns, Associate Professor in Arab Crossroads Studies at NYU Abu Dhabi.

Although al-Yūsī is remembered foremost as a logician and a saint, The Discourses presents other sides to the seventeenth-century Sufi intellectual, offering up his culinary and digestive opinions, his thoughts on composing poetry, a number of amusing anecdotes, and tips for parents who are dealing with late walkers.

This wide-ranging, digressive seventeenth-century account is largely inward-looking; it’s almost entirely uninterested in Europe or in al-Yūsī’s contemporaries in Cairo or Baghdad. And yet it also fluidly weaves history from the seventh through tenth centuries of the Arab East with the Morocco of his times.

In this first of a two-part discussion with M. Lynx Qualey, editor of ArabLit, Stearns answers a few questions about his own long journey with al-Yūsī, including how he met al-Yūsī, how he situates this work, and why he thought, “If there was ever a book I’d run into that should be translated, this was probably it.” END_OF_DOCUMENT_TOKEN_TO_BE_REPLACED

Chicken in Blackberry Sauce: A Recipe from Scents and Flavors The thirteenth-century Syrian cookbook Scents and Flavors is out in paperback this month with a new foreword by Claudia Roden, author of A Book of Middle Eastern Food.

In this video, translator and culinary expert Charles Perry shows us how to make chicken with blackberry sauce. Check out the video and written recipe below! Consider pairing this dish with another recipe from Scents and Flavors, like lemon-pistachio stuffing or carrots with mint and coriander.

If you try any of the recipes from Scents and Flavors, we’d love to hear about it on Twitter and Facebook.

END_OF_DOCUMENT_TOKEN_TO_BE_REPLACED

A Dish of Carrots: A Recipe from Scents and Flavors

The thirteenth-century Syrian cookbook Scents and Flavors comes out in paperback this month with a new foreword by Claudia Roden, author of A Book of Middle Eastern Food.

To mark the occasion, translator and culinary expert Charles Perry has recorded a video to show us how to make one of the book’s recipes for carrots, called simply “A Dish of Carrots.” Check out the video and written recipe below, and stay tuned for another recipe video to be released soon!

If you try this recipe or any of the recipes from Scents and Flavors, we’d love to hear about it on Twitter and Facebook.

END_OF_DOCUMENT_TOKEN_TO_BE_REPLACED

On Longing for Home: An Excerpt from The Discourses by al-Ḥasan al-Yūsī The Discourses by al-Ḥasan al-Yūsī is a collection of essays on a wide variety of subjects, including theology, literature, and history, by an influential Moroccan scholar who began writing in 1084/1685, at the age of roughly fifty-four. In this excerpt, translated by Justin Stearns, al-Yūsī writes about why we as humans long for our homelands:

There are three reasons [that a person likes to identify with his city and boast about it]: (1) Generally, a person knows no other place. (2) Exalted God has caused people to love their homes so that they remain in them and the earth to be cultivated in accordance with Exalted God’s decree. It is as the Prophet said, God bless and keep him: “God made Medina beloved to us to the same extent as Mecca, if not more.” (3) Natural inclination, for everyone feels affection for his land, just as he does for his mother or father. Thus, people continue to long for their home, or any place where they have experienced happiness and intimacy. There is a saying: “A noble person longs after his country, just as the camel rider longs for the watering hole.” END_OF_DOCUMENT_TOKEN_TO_BE_REPLACED In my entry-level course “Traditions of Islam,” we read from three different LAL texts. Early in the class, we focus on the figure of the Prophet Muḥammad. This section of the course ends with three selections from Maʿmar ibn Rāshid’s The Expeditions (translated by Sean W. Anthony). The stories “Those Who Emigrated to Abyssinia,” “The Story of the Slander,” and “The Marriage of Fatimah” END_OF_DOCUMENT_TOKEN_TO_BE_REPLACED Join us at MESA and AAR! We’re headed to New Orleans for MESA this week and to San Diego for AAR next week! If you’ll be at either conference, please come say hello to us at our booth in the exhibit hall. We’ll have tote bags, mugs, and of course lots of books.

At MESA, from November 15 to 17, we’ll be at booths 57 and 58. If you can’t make it to the conference, you can browse the books we’ll have at the conference (and find a special discount code) here. Experts on what is increasingly being referred to as the Global Middle Ages have pointed out that teachers who focus exclusively on Europe in their classes leave their students with a sense of empathy for medieval Europeans, but with a hostile and distorted view of non-Europeans. Such an outcome is tragic in and of itself, while also being exclusionary for students from minority backgrounds who might otherwise found medieval studies attractive. That outcome is also dangerous for society—since white supremacists often use distorted images of the Middle Ages in their propaganda. Many medieval historians now recognize the need to devote time and attention to people who lived outside of Europe—the urgency of which is reflected in the fact that the Medieval Academy of America dedicated this year’s conference to the Global Middle Ages. But what, then, to give the students as a primary source? My own research focuses on the crusades, and although I find the Islamic accounts of that period fascinating and moving, I did not want to introduce the students to Islam through the lens of holy war. As my advisor has often warned me, such an introduction to Islam feeds straight into discredited models of “a clash of civilizations” between East and West. Much better to find a source that lets the students see the Islamic world on its own terms. END_OF_DOCUMENT_TOKEN_TO_BE_REPLACED We are excited to announce the launch of the Library of Arabic Literature podcast! Wherever you may be, and whatever you find yourself doing—walking, driving, flying, cooking—steal a moment and listen to the episodes on SoundCloud, featuring conversations with our LAL fellows as they discuss their upcoming projects.

Episodes are available in English and Arabic. Click here to listen now, and don’t forget to subscribe to our SoundCloud channel! Why does reciprocal affection arise between two individuals who do not resemble each other in external appearance, are dissimilar in physical build, and do not dwell in physical proximity, so, say, one hails from the city of Farghānah, the other from Tāhart, one is tall and well-built, the other short and unattractively diminutive, one is lean and meager, the other sturdy and tough, one is hirsute and covered in thick hair, the other smooth and with very little hair, one is more tongue-tied than Bāqil, the other more eloquent than Saḥbān Wāʾil, one is more generous than a rain cloud after a lightning storm, the other more avaricious than a dog nursing a fleshless bone it toiled to secure, so that the divergence and discordance between the two provoke the spectator and inquirer to wonder? END_OF_DOCUMENT_TOKEN_TO_BE_REPLACED