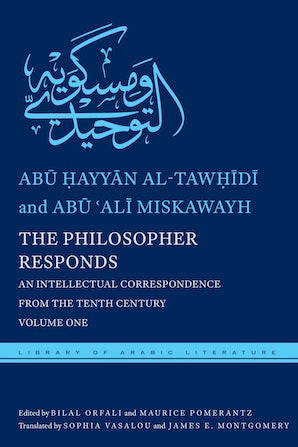 An Intellectual Correspondence from the Tenth Century, Volume One

Abū Ḥayyān al-Tawḥīdī (d. 414/1023) was a prominent litterateur and philosopher in Baghdad.

Bilal Orfali is Professor and Sheikh Zayed Chair of Arabic and Islamic Studies at the American University of Beirut and previously held the M.S. Sofia Chair in Arabic Studies at the Ohio State University. He specializes in Arabic literature, Sufism, and Qur'anic Studies. He co-edits al-Abhath Journal and Brill’s series Texts and Studies on the Qur’an. He is the author and editor of more than twenty books on Arabic Studies. His recent publications include The Anthologist’s Art (Brill, 2016), The Book of Noble Character (Brill, 2015), The Comfort of the Mystics (Brill, 2013), Sufism, Black and White (Brill, 2012), and In the Shadow of Arabic (Brill, 2011).

Maurice A. Pomerantz is Associate Professor of Literature at New York University Abu Dhabi. He is the author of Licit Magic: The Life and Letters of al-Sahib b. 'Abbad.

Sophia Vasalou is Senior Lecturer and Birmingham Fellow in Philosophical Theology at the University of Birmingham. Her books include Moral Agents and their Deserts: The Character of Mu'tazilite Ethics, Wonder: A Grammar, and Ibn Taymiyya’s Theological Ethics.

Why is laughter contagious? Why do mountains exist? Why do we long for the past, even if it is scarred by suffering? Spanning a vast array of subjects that range from the philosophical to the theological, from the philological to the scientific, The Philosopher Responds is the record of a set of questions put by the litterateur Abu Hayyan al-Tawhidi to the philosopher and historian Abu 'Ali Miskawayh. Both figures were foremost contributors to the remarkable flowering of cultural and intellectual life that took place in the Islamic world during the reign of the Buyid dynasty in the fourth/tenth century.

The correspondence between al-Tawhidi and Miskawayh holds a mirror to many of the debates and preoccupations of the time and reflects the spirit of rationalistic inquiry that animated their era. It also provides insight into the intellectual outlooks of two thinkers who were divided as much by their distinctive temperaments as by the very different trajectories of their professional careers.

Alternately whimsical and tragic, wondering and brooding, trivial and profound, al-Tawhidi’s questions provoke an interaction as interesting in its spiritedness as in its content. This new edition of The Philosopher Responds is accompanied by the first full-length English translation of this important text, bringing this interaction to life for the English reader.