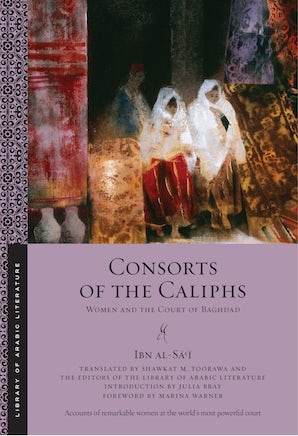 Consorts of the Caliphs

Women and the Court of Baghdad

Ibn al-Sāʿī (d. 674/1276) was a historian, law librarian, and prolific author from Baghdad. His considerable scholarly output included treatises on hadith, literary commentaries, histories of the caliphs, and biographical collections, though little has survived.

Shawkat M. Toorawa is Professor of Arabic literature in the Department of Near Eastern Languages & Civilizations at Yale University, where he teaches classical Arabic, the Arabic humanities, and literatures of the world.

Julia Bray became the Abdulaziz Saud AlBabtain Laudian Professor of Arabic at the University of Oxford and a fellow of St. John’s College in 2012, having previously taught at the universities of Manchester, Edinburgh, St Andrews and Paris 8-Vincennes—Saint-Denis. She writes on medieval to early modern Arabic literature, life-writing, and social history. She has contributed to the New Cambridge History of Islam (2010), to Essays in Arabic Literary Biography 1350-1850 (2009), and to cross-cultural studies such as Approaches to the Byzantine Family (2013) and edited Writing and Representation in Medieval Islam (2006). With Wen-chin Ouyang, she edits the monograph series Edinburgh Studies in Classical Arabic Literature. With Helen Blatherwick, she is editing a special issue of the journal Cultural History on the history of emotions in Arabic.

Marina Warner DBE is Professor of English and Creative Writing at Birkbeck College, University of London; a Fellow of All Souls College, Oxford; and a Fellow of the British Academy. Her book Stranger Magic: Charmed States and the Arabian Nights won the 2012 National Book Critics Circle Award for Criticism, as well as the 2013 Sheikh Zayed Book Award.

Accounts of remarkable women at the world's most powerful court

Consorts of the Caliphs is a seventh/thirteenth-century compilation of anecdotes about thirty-eight women who were consorts to those in power, most of them concubines of the early Abbasid caliphs and wives of latter-day caliphs and sultans. This slim but illuminating volume is one of the few surviving texts by the prolific Baghdadi scholar Ibn al-Sa'i, who chronicled the academic and political elites of his city in the final years of the Abbasid dynasty and the period following the cataclysmic Mongol invasion of 656/1258.

In this work, Ibn al-Sa'i is keen to forge a connection between the munificent wives of his time and the storied
lovers of the so-called golden age of Baghdad. Thus, from the earlier period, we find Harun al-Rashid pining for his brother’s beautiful slave, Ghadir, and the artistry of such musical and literary celebrities as Arib and Fadl, who
bested the male poets and singers of their day. From times closer to Ibn al-Sa?i’s own, we meet women such as Banafsha, who endowed law colleges, had bridges built, and provisioned pilgrims bound for Mecca; slave women whose funeral services were led by caliphs; and noble Saljuq princesses from Afghanistan.

Informed by the author’s own sources, his insider knowledge, and well-known literary materials, these singular
biographical sketches bring the belletristic culture of the Baghdad court to life, particularly in the personal narratives and poetry of culture heroines otherwise lost to history.