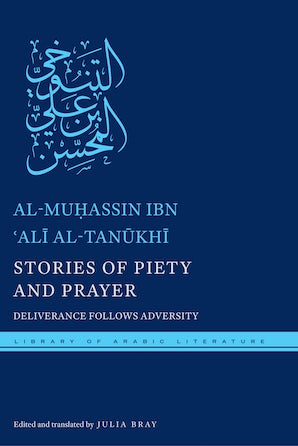 Stories of Piety and Prayer

Al-Muḥassin ibn ʿAlī al-Tanūkhī (327–84/939–94) lived in Basra and Baghdad. As a judge and man of letters belonging to a family with many connections, he was well placed to record the literary trends of his day. Deliverance Follows Adversity is one of two anthologies he compiled.

Julia Bray became the Abdulaziz Saud AlBabtain Laudian Professor of Arabic at the University of Oxford and a fellow of St. John’s College in 2012, having previously taught at the universities of Manchester, Edinburgh, St Andrews and Paris 8-Vincennes—Saint-Denis. She writes on medieval to early modern Arabic literature, life-writing, and social history. She has contributed to the New Cambridge History of Islam (2010), to Essays in Arabic Literary Biography 1350-1850 (2009), and to cross-cultural studies such as Approaches to the Byzantine Family (2013) and edited Writing and Representation in Medieval Islam (2006). With Wen-chin Ouyang, she edits the monograph series Edinburgh Studies in Classical Arabic Literature. With Helen Blatherwick, she is editing a special issue of the journal Cultural History on the history of emotions in Arabic.

One of the most popular and influential Arabic books of the Middle Ages, Deliverance Follows Adversity is an anthology of stories and anecdotes designed to console and encourage the afflicted. Regarded as a pattern-book of Arabic storytelling, this collection shows how God’s providence works through His creatures to rescue them from tribulations ranging from religious persecution and medical emergencies to political skullduggery and romantic woes.

A resident of Basra and Baghdad, al-Tanukhi (327–84/939–94) draws from earlier Arabic classics as well as from oral stories relayed by the author’s tenth-century Iraqi contemporaries, who comprised a wide circle of writers, intellectuals, judges, government officials, and family members. This edition and translation includes the first three chapters of the work, which deal with Qur'anic stories and prayers that bring about deliverance, as well as general instances of the workings of providence. The volume incorporates material from manuscripts not used in the standard Arabic edition, and is the first translation into English. The complete translation, spanning four volumes, will be the first integral translation into any European language.