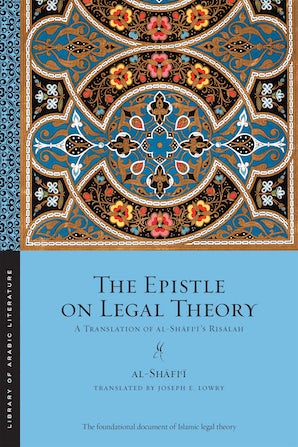 The Epistle on Legal Theory

A Translation of Al-Shafi'i's Risalah

Muhammad ibn Idris al-Shafi'i (d. 204H/820AD) was the eponym of the Shafi'i school of legal thought, one of the four rites in Sunni Islam.

Joseph E. Lowry is Associate Professor of Arabic and Islamic Studies at the University of Pennsylvania. His books include Early Islamic Legal Theory: The Risala of Muhammad ibn Idris al-Shafiʾi. His research and publications focus on the Qurʾan, Islamic law, and Arabic literature. Before becoming an academic he was an attorney in private practice in Washington, D.C.

The Epistle on Legal Theory is the oldest surviving Arabic work on Islamic legal theory and the foundational document of Islamic jurisprudence. Its author, Muhammad ibn Idris al-Shafi'i (d. 204/820), was the eponym of the Shafi'i school of legal thought, one of the four rites in Sunni Islam. This fascinating work offers the first systematic treatment in Arabic of key issues in Islamic legal thought. These include a survey of the importance of Arabic as the language of revelation, principles of textual interpretation to be applied to the Qur'an and prophetic Traditions, techniques for harmonizing apparently contradictory precedents, legal epistemology, rules of inference, and discussions of when legal interpretation is required. The author illustrates his theoretical claims with numerous examples drawn from nearly all areas of Islamic law, including ritual law, commercial law, tort law, and criminal law. The text thus provides an important window into both Islamic law and legal thought in particular and early Islamic intellectual history in general .

This new translation by a leading scholar of al-Shafi'i and his thought makes available in lucid, modern English one of the earliest complete works on Islamic law—one that is centrally important for the formation of Islamic legal thought and the Islamic legal tradition.