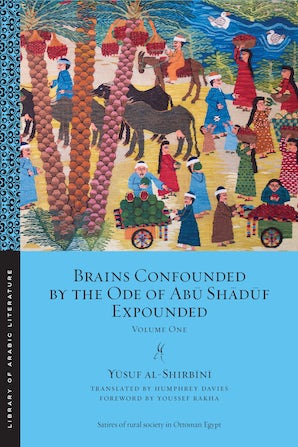 Brains Confounded by the Ode of Abū Shādūf Expounded

Yūsuf al-Shirbīnī was a well-educated Egyptian from the eleventh/seventeenth century, thought to originate from the town of Shirbīn, then a significant rural center in the eastern part of Delta. Little is known about him--including his social standing and profession--beyond Brains Confounded and two other extant texts: The Pearls (Al-Laʾāliʾ wa-l-durar) and The Casting Aside of the Clods for the Unstringing of the Pearls (Ṭarḥ al-madar li-ḥall al-laʾāliʾ wa-l-durar).

Youssef Rakha is an Egyptian novelist, poet, and photographer. His first novels to appear in English are The Crocodiles and The Book of the Sultan’s Seal, a literary experiment inspired by medieval Cairo historians, which won the 2015 Banipal Seif Ghobash Prize for Paul Starkey’s translation.

Witty, bawdy, and vicious, Yūsuf al-Shirbīnī’s Brains Confounded pits the “coarse” rural masses against the “refined” urban population. In Volume One, al-Shirbīnī describes the three rural “types”—peasant cultivator, village man-of-religion, and rural dervish—offering anecdotes testifying to the ignorance, dirtiness, and criminality of each. In Volume Two, he presents a hilarious parody of the verse-and-commentary genre so beloved by scholars of his day, with a 47-line poem supposedly written by a peasant named Abū Shādūf, who charts the rise and fall of his fortunes. Wielding the scholarly tools of elite literature, al-Shirbīnī responds to the poem with derision and ridicule, dotting his satire with digressions into love, food, and flatulence.

Volume Two of Brains Confounded is followed by Risible Rhymes, a concise text that includes a comic disquisition on “rural” verse, mocking the pretensions of uneducated poets from Egypt’s countryside. Risible Rhymes also examines various kinds of puzzle poems, which were another popular genre of the day, and presents a debate between scholars over a line of verse by the fourth/tenth-century poet al-Mutanabbī. Together, Brains Confounded and Risible Rhymes offer intriguing insight into the intellectual concerns of Ottoman Egypt, showcasing the intense preoccupation with wordplay, grammar, and stylistics and shedding light on the literature of the era.