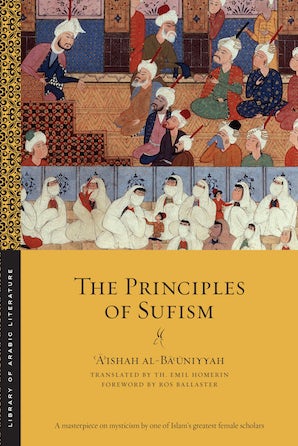 The Principles of Sufism

ʿĀʾishah al-Bāʿūniyyah (d. 923/1517) of Damascus was one of the great women scholars in Islamic history. A mystic and prolific poet and writer, ʿĀʾishah
composed more works in Arabic than any other woman before the twentieth century.

Ros Ballaster is Professor of Eighteenth-Century Studies at the University of Oxford and professorial fellow in English at Mansfield College. Two monographs, Seductive Forms: Women’s Amatory Fiction 1684-1740 (Oxford University Press, 1992) and Fabulous Orients: Fictions of the East in England 1662-1785 (Oxford University Press, 2005), investigate the importance of fantasy in the shaping of the eighteenth-century English novel.

'A'ishah al-Ba'uniyyah of Damascus was one of the great women scholars in Islamic history. Born into a prominent family of pious scholars and Sufi devotees, 'A'ishah received a thorough religious education and memorized the Quran at age eight. A mystic and a prolific poet and writer, she composed more works in Arabic than any other woman before the twentieth century. Yet despite her extraordinary literary and religious achievements, 'A'ishah al-Ba'uniyyah remains largely unknown. For the first time, her key work, The Principles of Sufism, is available in English translation.

The Principles of Sufism is a mystical guide book to help others on their spiritual path. Outlining the four principles of Repentance, Sincerity, Remembrance, and Love, it traces the fundamental stages and states of the spiritual novice’s transformative journey, emphasizing the importance of embracing both human limitations and God’s limitless love. Drawing on lessons and readings from centuries-old Sufi tradition, 'A'ishah advises the seeker to repent of selfishness and turn to a sincere life of love. In addition to his lucid translation, Th. Emil Homerin provides an insightful introduction, notes and a glossary to 'A'ishah al-Ba'uniyyah’s remarkable account of the pursuit of mystical illumination.