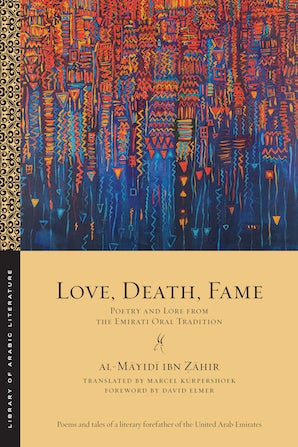 Poetry and Lore from the Emirati Oral Tradition

Al-Māyidī ibn Ẓāhir (b. seventeenth century) is regarded as the earliest “Emirati” poet.

Marcel Kurpershoek is a specialist in the oral traditions and poetry of Arabia. He is the author of the five-volume Oral Poetry and Narratives from Central Arabia, as well as several books on Middle Eastern history and culture. He is the editor and translator of Arabian Satire by Ḥmēdān al-Shwēʿir and Arabian Romantic by ʿAbdallāh ibn Sbayyil. He served as Netherlands ambassador to Pakistan, Afghanistan, Turkey, and Poland, and as special envoy to Syria until 2015.

David Elmer is the Eliot Professor of Greek Literature at Harvard University and author of The Poetics of Consent: Collective Decision Making and the Iliad.

Love, Death, Fame features the poetry of al-Māyidī ibn Ẓāhir, who has been embraced as the earliest poet in what would later become the United Arab Emirates. Although little is known about his life, he is the subject of a sizeable body of folk legend and is thought to have lived in the seventeenth century, in the area now called the Emirates. The tales included in Love, Death, Fame portray him as a witty, resourceful, scruffy poet, at times combative and at times kindhearted.

His poetry primarily features verses of wisdom and romance, with scenes of clouds and rain, desert migrations, seafaring, and pearl diving. Like Arabian Romantic and Arabian Satire, this collection is a prime example of Nabaṭī poetry, combining vernacular language of the Arabian Peninsula with archaic vocabulary and images dating to Arabic poetry’s very origins. Distinguished by Ibn Ẓāhir’s unique voice, Love, Death, Fame offers a glimpse of what life was like four centuries ago in the region that is now the UAE.