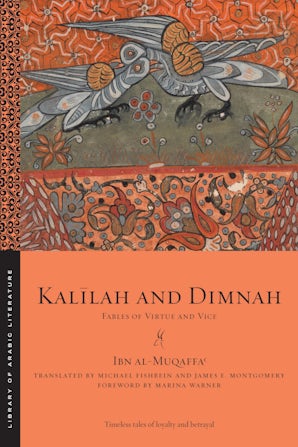 Fables of Virtue and Vice

Ibn al-Muqaffaʿ (d. 139/757) was a Persian translator, author, thinker, and state official who wrote important treatises on rulership in Arabic.

Marina Warner DBE is Professor of English and Creative Writing at Birkbeck College, University of London; a Fellow of All Souls College, Oxford; and a Fellow of the British Academy. Her book Stranger Magic: Charmed States and the Arabian Nights won the 2012 National Book Critics Circle Award for Criticism, as well as the 2013 Sheikh Zayed Book Award.

Timeless fables of loyalty and betrayal

Like Aesop’s Fables, Kalīlah and Dimnah is a collection designed not only for moral instruction, but also for the entertainment of readers. The stories, which originated in the Sanskrit Panchatantra and Mahabharata, were adapted, augmented, and translated into Arabic by the scholar and state official Ibn al-Muqaffaʿ in the second/eighth century. The stories are engaging, entertaining, and often funny, from “The Man Who Found a Treasure But Could Not Keep It,” to “The Raven Who Tried To Learn To Walk Like a Partridge” and “How the Wolf, the Raven, and the Jackal Destroyed the Camel.”

Kalīlah and Dimnah is a “mirror for princes,” a book meant to inculcate virtues and discernment in rulers and warn against flattery and deception. Many of the animals who populate the book represent ministers counseling kings, friends advising friends, or wives admonishing husbands. Throughout, Kalīlah and Dimnah offers insight into the moral lessons Ibn al-Muqaffaʿ wished to impart to rulers—and readers.