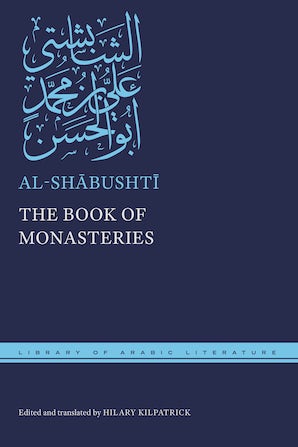 The Book of Monasteries

Al-Shābushtī (d. 388/998 or 389/999) was a scribe from Baghdad who traveled around Iraq, southern Anatolia, and Syria before moving to Cairo, where he became a court companion and librarian to the Caliph al-ʿAzīz.

Hilary Kilpatrick received her DPhil from Oxford. She has taught at universities in the UK, the Netherlands and Switzerland and is now an independent scholar based in Lausanne, Switzerland. She has published a study of al-Iṣbahānī’s Book of Songs and many articles on modern, classical, and Ottoman Arabic literature.

A literary tour of Christian monasteries of the medieval Middle East

The Book of Monasteries takes readers on a tour of the monasteries of the Middle East by presenting the rich variety of poetry and prose associated with each monastery. Starting with Baghdad, readers are taken up the Tigris into the mountains of south-eastern Anatolia before moving to Palestine and Syria, along the Euphrates down to the old Christian center of Ḥīrah and onward to Egypt. For the literary anthologist al-Shābushtī, who was Muslim, monasteries were important sites of interactions with Christian communities that made up about half the population of the Abbasid Empire at the time.

Each section in this anthology covers a specific monastery, beginning with a discussion of its location and the reason for its name. Al-Shābushtī presents poems, anecdotes, and historical reports related to each. He selects heroic and spectacular incidents, illustrations of caliphal extravagance, and events that gave rise to memorable verse. Important political personalities and events that were indirectly linked with monasteries also appear in the collection, as do scenes of festive court life and gruesome murders. Al-Shābushtī uses these accounts not to teach history but to offer a meditation on the splendor of Abbasid culture as well as moral and philosophical lessons: the ephemerality of power; the virtues of generosity and tolerance; the effectiveness of eloquence in prose and poetry; the fleeting nature of pleasure and beauty. Translated into English for the first time, The Book of Monasteries offers an entertaining panorama of religious, political, and literary life during the Abbasid era.