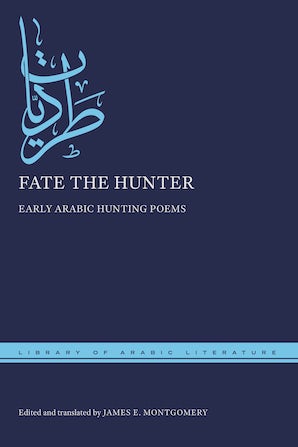 In the poems of Fate the Hunter, many of them translated into English for the first time, trained cheetahs chase oryx, and goshawks glare from falconers’ arms, while archers stalk their prey across the desert plains and mountain ravines of the Arabian peninsula. With this collection, James E. Montgomery, acclaimed translator of War Songs by ʿAntarah ibn Shaddād, offers a new edition and translation of twenty-six early works of hunting poetry, or ṭardiyyāt. Included here are poems by pre-Islamic poets such as Imruʾ al-Qays and al-Shanfarā, as well as poets from the Umayyad era such as al-Shamardal ibn Sharīk. The volume concludes with the earliest extant epistle about hunting, written by ʿAbd al-Ḥamīd al-Kātib, a master of Arabic prose.

Through the eyes of the poet, the hunter’s pursuit of the quarry mirrors Fate’s pursuit of both humans and nonhumans and highlights the ambiguity of the encounter. With breathtaking descriptions of falcons, gazelles, and saluki gazehounds, the poems in Fate the Hunter capture the drama and tension of the hunt while offering meditations on Fate, mortality, and death.