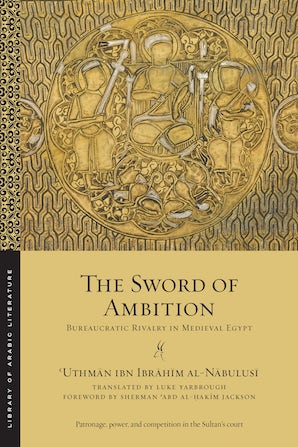 The Sword of Ambition

'Uthman ibn Ibrahim al-Nabulusi (d. 660/1262), of Palestinian origin, was a leading Egyptian bureaucrat in the court of the Ayyubid sultans. In addition to his pivotal work, The Sword of Ambition, he wrote several works on Egyptian administration and government, including A Presentation of the Living, Eternal God's Work in Regulating the Fayyum, the most extensive tax record that survives from the medieval Middle East.

Luke Yarbrough is Assistant Professor in the Department of Near Eastern Languages and Civilizations at UCLA. His research is concerned with the history of the pre-modern Middle East and North Africa, including inter-communal relations, law and prescriptive discourses, Arabic historiography, the oral transmission of knowledge, and comparative history.

Sherman Jackson is King Faisal Chair in Islamic Thought and Culture and Professor of Religion and American Studies and Ethnicity at the University of Southern California.

Patronage, power, and competition in the Sultan’s court

The Sword of Ambition opens a new window onto interreligious rivalry among elites in medieval Egypt. Written by the unemployed bureaucrat 'Uthman ibn Ibrahim al-Nabulusi, it contains a wealth of little-known historical anecdotes, unusual religious opinions, obscure and witty poetry, and humorous cultural satire. Leaving no rhetorical stone unturned, al-Nabulusi pours his deep knowledge of history, law, and literature into the work—addressed to the Ayyubid sultan—as he argues against the employment of Coptic and Jewish officials.

Written at a time when much of the inter-communal animosity of the era was conditioned by fierce competition for scarce resources that were increasingly controlled by an ideologically committed Sunni Muslim state, The Sword of Ambition reminds us that “religious” conflict must always be considered in its broader historical perspective.