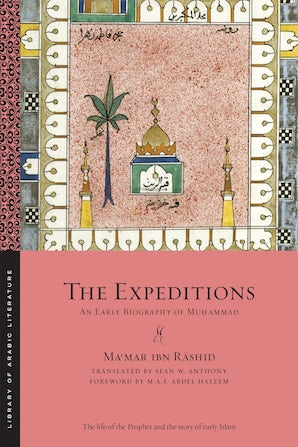 An Early Biography of Muḥammad

Maʿmar ibn Rāshid (96-153/714-770) was originally a Persian slave from Basra who traveled extensively trading wares for the Azd tribe. Thanks to his nomadic profession and his dealings with the court of the Umayyad caliphs, he became acquainted with—and ultimately the pupil of—one of the greatest Muslim scholars of his generation, Ibn Shihāb al-Zuhrī (d. 124/742).

Sean W. Anthony is Assistant Professor of History at University of Oregon. His books include The Caliph and the Heretic: Ibn Saba and the Origins of Shiism and Crucifixion and the Spectacle of Death: Umayyad Crucifixion in its Late Antique Context. His research and publications focus on the emergence of Islam and the origins of its sacred and sectarian traditions.

The Expeditions is one of the oldest biographies of the Prophet Muḥammad to survive into the modern era. Its primary author, Maʿmar ibn Rāshid (96-153/714-770), was a prominent scholar from Basra in southern Iraq who was revered for his learning in prophetic traditions, Islamic law, and the interpretation of the Qurʾan. This fascinating foundational seminal work contains stories handed down by Maʿmar to his most prominent pupil, ʿAbd al-Razzāq of Sanaa, relating Muḥammad’s early life and prophetic career as well as the adventures and tribulations of his earliest followers during their conquest of the Near East.

This new translation, which renders the original text into readable, modern English for the first time, is accompanied by numerous annotations elucidating the cultural, religious, and historical contexts of the events and individuals described within its pages.

The Expeditions represents an important testimony to the earliest Muslims’ memory of the lives of Muḥammad and his companions, and is an indispensable text for gaining insight into the historical biography of both the Prophet and the rise of the Islamic empire.