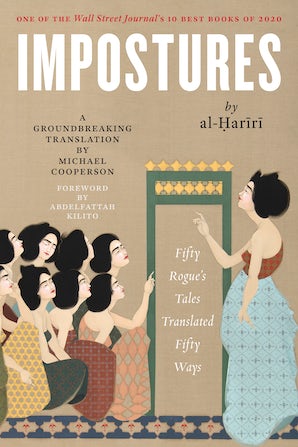 An itinerant con man. A gullible eyewitness narrator. Voices spanning continents and centuries. These elements come together in Impostures, a groundbreaking new translation of a celebrated work of Arabic literature.

Impostures follows the roguish Abū Zayd al-Sarūjī in his adventures around the medieval Middle East—we encounter him impersonating a preacher, pretending to be blind, and lying to a judge. In every escapade he shows himself to be a brilliant and persuasive wordsmith, composing poetry, palindromes, and riddles on the spot. Award-winning translator Michael Cooperson transforms Arabic wordplay into English wordplay of his own, using fifty different registers of English, from the distinctive literary styles of authors such as Geoffrey Chaucer, Mark Twain, and Virginia Woolf, to global varieties of English including Cockney rhyming slang, Nigerian English, and Singaporean English.

Featuring picaresque adventures and linguistic acrobatics, Impostures brings the spirit of this masterpiece of Arabic literature into English in a dazzling display of translation.