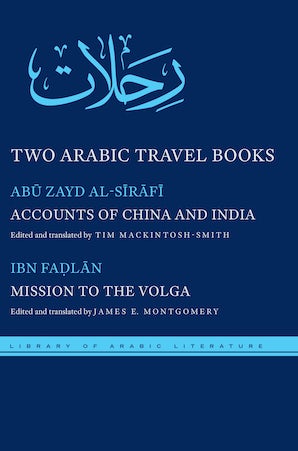 Accounts of China and India and Mission to the Volga

Abū Zayd al-Sīrāfī was a seafarer who moved from the Persian port-city of Siraf to Basra in 303/915-916. He wrote the second half of Accounts of China and India, supplementing an earlier section written by an unknown mariner and merchant fifty years earlier.

Aḥmad ibn Faḍlān was a member of a diplomatic mission sent by the Abbasid caliph al-Muqtadir in 309-310/921-922 to the king of the Volga Bulghars. His is the only existing record of that mission.

James E. Montgomery, author of Al-Jāḥiẓ: In Praise of Books, is Sir Thomas Adams’s Professor of Arabic at the University of Cambridge and Fellow of Trinity Hall. His latest publications are Loss Sings, a collaboration with the celebrated Scottish artist Alison Watt, and Dīwān ʿAntarah ibn Shaddād: A Literary-Historical Study.

Two Arabic Travel Books combines two exceptional exemplars of Arabic travel writing, penned in the same era but chronicling wildly divergent experiences. Accounts of China and India is a compilation of reports and anecdotes on the lands and peoples of the Indian Ocean, from the Somali headlands to China and Korea. The early centuries of the Abbasid era witnessed a substantial network of maritime trade—the real-life background to the Sindbad tales. In this account, we first travel east to discover a vivid human landscape, including descriptions of Chinese society and government, Hindu religious practices, and natural life from flying fish to Tibetan musk-deer and Sri Lankan gems. The juxtaposed accounts create a jigsaw picture of a world not unlike our own, a world on the road to globalization. In its ports, we find a priceless cargo of information; here are the first foreign descriptions of tea and porcelain, a panorama of unusual social practices, cannibal islands, and Indian holy men—a marvelous, mundane world, contained in the compass of a novella.

In Mission to the Volga, we move north on a diplomatic mission from Baghdad to the upper reaches of the Volga River in what is now central Russia. This colorful documentary by Ibn Fadlan relates the trials and tribulations of an embassy of diplomats and missionaries sent by caliph al-Muqtadir to deliver political and religious instruction to the recently-converted King of the Bulghars. During eleven months of grueling travel, Ibn Fadlan records the marvels he witnesses on his journey, including an aurora borealis and the white nights of the North. Crucially, he offers a description of the Viking Rus, including their customs, clothing, tattoos, and a striking account of a ship funeral. Mission to the Volga is also the earliest surviving instance of sustained first-person travel narrative in Arabic—a pioneering text of peerless historical and literary value.

Together, the stories in Two Arabic Travel Books illuminate a vibrant world of diversity during the heyday of the Abbasid empire, narrated with as much curiosity and zeal as they were perceived by their observant beholders.