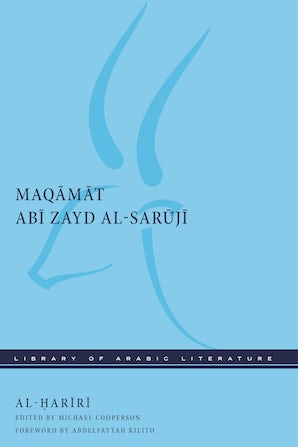 Maqāmāt Abī Zayd al-Sarūjī is a scholarly, Arabic-only edition of the celebrated work by al-Ḥarīrī, which is also available in English translation from the Library of Arabic Literature as Impostures. Al-Ḥarīrī's text consists of fifty stories about the adventures of the itinerant con man and master of persuasion Abū Zayd al-Sarūjī, as told by the equally itinerant and often gullible narrator al-Ḥārith ibn Hāmmam. Al-Ḥarīrī was a virtuoso writer of the rhymed prose narrative genre known as the maqāmah, which would continue as a popular literary form into the twentieth century.

An Arabic edition with an Arabic foreword and English scholarly apparatus.