A Tale of Two Jackals: An Excerpt from Kalīlah and Dimnah

Like Aesop’s Fables, Kalīlah and Dimnah: Fables of Virtue and Vice is a collection of stories that offers both moral instruction and entertainment. The stories, which originated in the Sanskrit Panchatantra and Mahabharata, were adapted, augmented, and translated into Arabic by the scholar Ibn al-Muqaffaʿ in the second/eighth century, and here have been translated into English by Michael Fishbein and James E. Montgomery. In this excerpt, we meet the titular characters, who are jackals, and learn of Dimnah’s plan to become an advisor to the king. 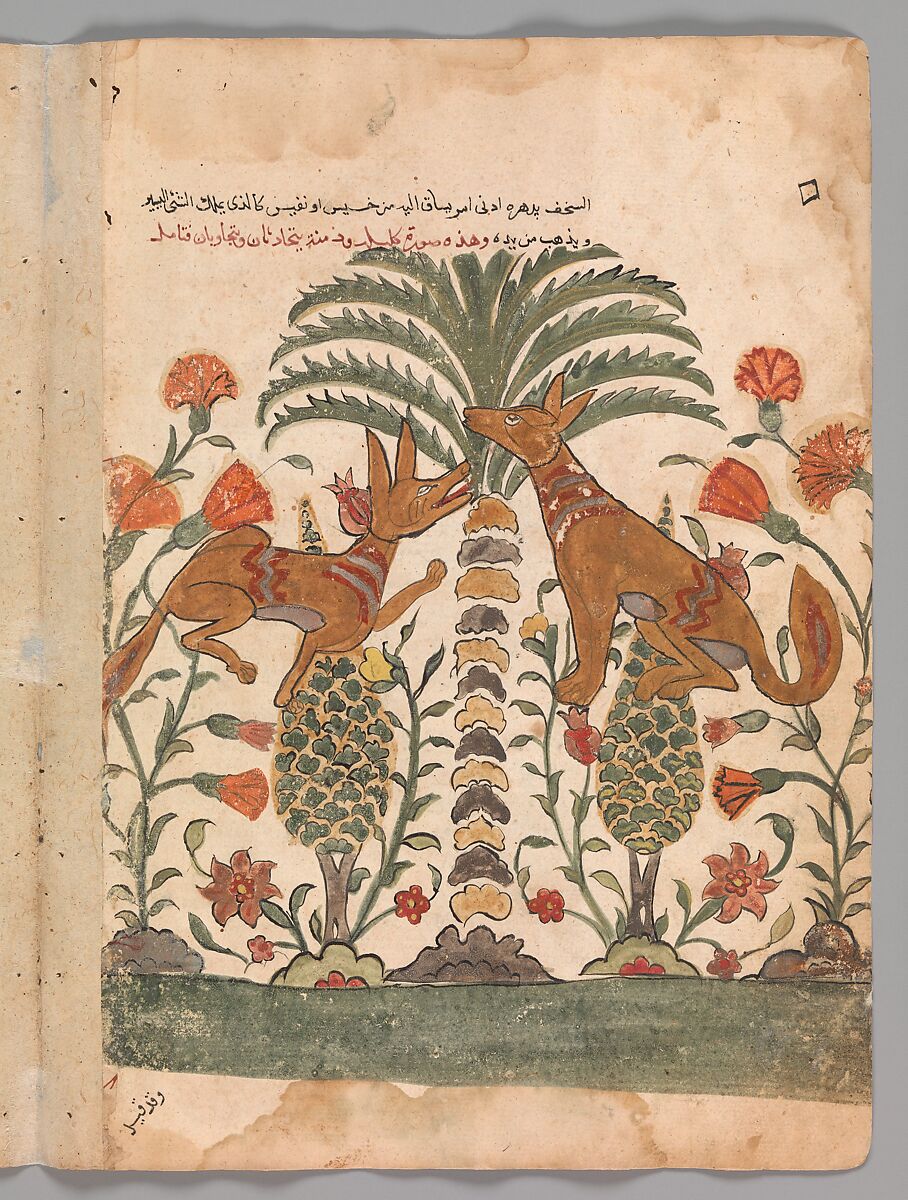 …Nearby there lived a lion. As king of that region, he had an entourage of many wild animals: wolves, bears, jackals, foxes, and so forth. He was proud and given to relying only on his own judgment, which was far from perfect. When he heard the ox bellowing—he had never seen an ox or heard one bellow—he grew frightened, but not wanting his soldiers to notice, did not leave his place.

Among the animals in his entourage were two jackals, one named Kalīlah, the other Dimnah. Each was clever and intelligent, but of the two Dimnah was greedier, more ambitious, and less contented. The lion had not yet made their acquaintance. Dimnah asked Kalīlah, “Brother, what do you think is wrong with the lion? Why is he staying put, not stirring or showing his usual liveliness?”

“Why are you asking?” replied Kalīlah. “It’s none of your business. Our situation here is good; here at the king’s gate we find enough to eat. We’re not the sort of people who converse with kings, discuss their affairs, and inquire into unknown matters. Enough of this! Anyone who interferes in things that are none of his business will suffer the same fate as the monkey.”

“And what was that?” asked Dimnah. 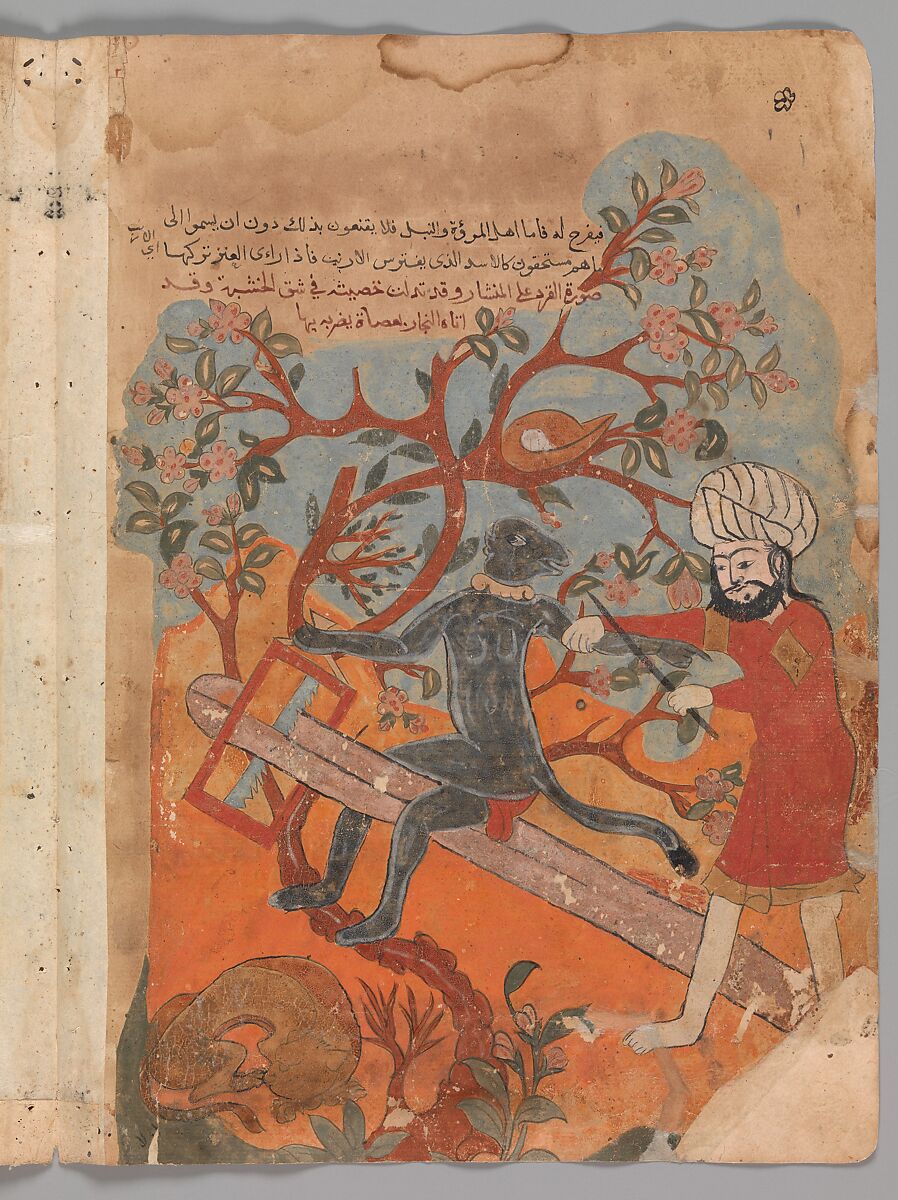 And Kalīlah told the following tale: A monkey, so they say, once saw a carpenter splitting a log using two wedges, straddling it like a knight on horseback. Whenever he split a cubit’s length, he would drive in a wedge, sitting astride the log like a rider on a mount. At one point, the carpenter got up to relieve himself, and the monkey dashed over to try his hand at something that was none of his business. He straddled the log, with his back toward the split and his face toward the wedge, with his testicles dangling in the split, and pulled out the wedge. When the wedge came out, the log closed with his testicles deep in the split. He fell over in a faint, and the beating he received from the carpenter was worse still.

“I see what you’re driving at,” replied Dimnah. “But people who approach kings don’t do it only to fill their stomachs. Stomachs can be filled anywhere. People who approach kings seek eminence: a position that enables them to gladden their friends and rise above their enemies. The lowest sort of people, content with a pittance, are like the dog that rejoices at finding a dry bone. People of valor and merit aren’t satisfied with little, or content with a pittance; their ambition aspires to what they deserve—like the lion who catches a hare, but as soon as he sees a wild ass, drops the hare and pursues the ass. Haven’t you seen that a dog will wag his tail until he is thrown a crust, but a full-grown elephant, conscious of his strength and worth, won’t eat even the best fodder until he is stroked and coaxed? Anyone who does not live in obscurity, a credit to himself and to his friends, lives a long life, however short his years. Anyone who lives life in solitude and scarcity, of little use to himself or others, lives a short life, however long his years. The worst lot, they say, is a long life lived in scarcity and distress. They also say that anyone interested only in his stomach is no different from cattle and sheep.”

“I understand what you’re saying,” replied Kalīlah. “But think it over and consider your situation. Everyone has his place and measure. A person ought to be content and satisfied if he can hold his own. Our position is not so bad as to make us despise our present circumstances.”

“Positions,” replied Dimnah, “can be contested and shared. The industrious person’s industry raises him from a lowly to a lofty place, but the person who lacks industriousness lowers himself from a lofty to a lowly place. It is difficult and taxing to rise from the depths to the heights, but easy to fall from a height. It is like a heavy stone: hard to lift onto your shoulder, but easy to drop. So we ought to aspire to a higher place, seeking it through our industry, and not stay where we are when we can rise higher.” 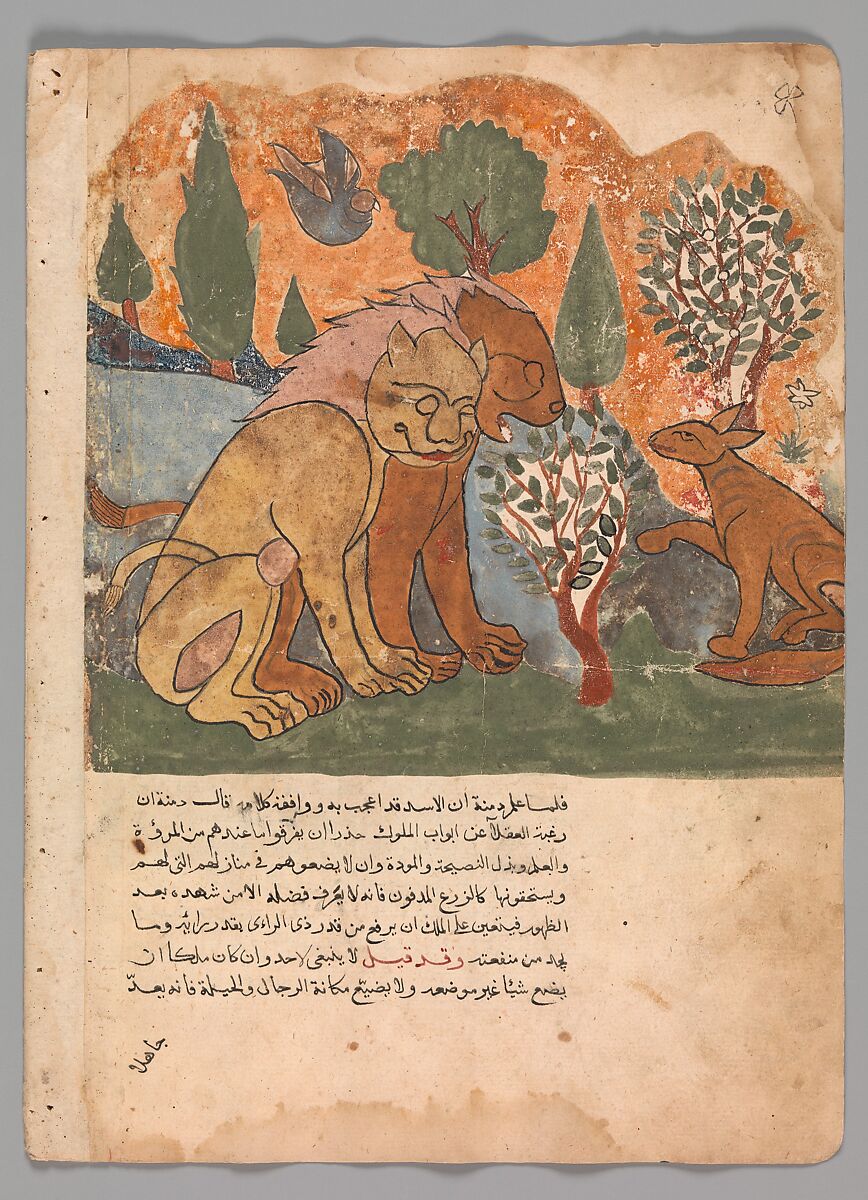 “The Lion King, with His Mother, Receives Dimna,” Folio from a Kalila wa Dimna. Metropolitan Museum of Art.

“What have you decided to do?”

“I intend to present myself to the lion straightaway. He’s indecisive, and he and his soldiers are at a loss. I may be able to offer him good advice while he is in this state, and gain honor and glory in his eyes.”

“What makes you think the lion is at a loss?”

“I know it by insight and by inference. A perceptive person can tell his companion’s inward disposition from his visible demeanor and actions, and can infer it from his behavior and appearance.”

“How do you hope to gain a place at the lion’s court, when you’ve never rubbed shoulders with rulers and know nothing about how to serve them or behave in their presence?”

“A strong person is equal to a heavy burden: if he can pick it up, he can carry it. No burden is too difficult for the strong, no work too arduous for the bold. An unfamiliar place poses no challenge for a person of intelligence, and no one can resist the blandishments of a person who pretends to be humble.”

“A ruler doesn’t bestow favor on the best of his courtiers; he honors them according to their closeness. They say that in this respect a ruler is like a grapevine, which clings not to the noblest but to the closest tree, just as women cling to the closest man. How do you expect to gain a place at the lion’s court, when you’ve never been close to him?”

“I understand what you’re saying, and you’re right. But you must realize that those close to the ruler at present weren’t always so: they had been distant from him and then became close to him and acquired standing. I, too, will make every effort to acquire standing with the lion. They say that no one can fail to obtain what he wants from the ruler if he perseveres at the ruler’s gate, swallows his pride, bears insults, controls his anger, and treats important people with skill.”

“I understand. But let’s assume you’ve gained access to the lion: what is this ‘skill’ you hope to use to gain a place at his court?” “Once I’m close to the lion, I’ll get to know his character. I’ll defer to his wishes, humor him, and rarely disagree with him. When he wants something I think is right, I’ll praise it, extol its benefits, and encourage him, so his delight with it increases. If he wants something I fear may bring harm and disgrace, I’ll make him see the harm and disgrace in it. I hope that in this way the lion will become more and more fond of me and see in me what he sees in no one else. If you’re cunning and skillful enough, you can turn truth into falsehood and falsehood into truth—like an accomplished artist who paints a wall with designs that seem to jut out from the wall, though they don’t in reality, and designs that appear to recede, though they don’t in reality. Once the lion recognizes my merits and knows what I have to offer, he’ll be all the more eager to honor me and keep me close.”

“If this is your plan,” said Kalīlah, “I must warn you about the dangers of associating with rulers. Scholars say there are three things that only fools attempt and from which few escape unscathed: associating with rulers, trusting women with secrets, and drinking poison as an experiment. Scholars have likened a ruler to a steep, rugged mountain where all sorts of pleasant fruit grow, but which is home to lions, leopards, and every kind of ferocious beast—the ascent may be difficult, but staying there is harder yet.”

“That may be true,” said Dimnah, “but without risk there is no reward. If we abandon a promising enterprise out of timidity or fear of the consequences, we shall never attain greatness. Three things, they say, can be accomplished only with knowledge, lofty ambition, and great danger: serving a ruler, sailing the seas as a merchant, and fighting an enemy. They also say that there are only two places where a man of great valor should be found: as an honored companion of kings or as a hermit in the company of ascetics—just like the elephant, whose majesty and beauty belong in only two places: either roaming free in the forest, or as a mount for kings.”

“May God grant you success in your decision!”

So Dimnah set out, and when he arrived he greeted the lion.

« In Memoriam: Humphrey Davies
“The bird of my soul flew back to its nest”: An excerpt from The Essence of Reality »