The Story of the Snake: An Excerpt from Stories of Piety and Prayer 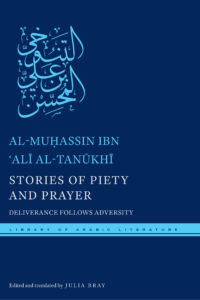 One of the most popular and influential Arabic books of the Middle Ages, al-Tanukhi’s Deliverance Follows Adversity is an anthology of stories and anecdotes designed to console and encourage the afflicted. Stories of Piety and Prayer consists of the first three chapters of Deliverance Follows Adversity and features stories that show how God’s providence works through His creatures to rescue them from tribulations ranging from religious persecution to romantic woes, and in this case, an encounter with a treacherous serpent. The story begins:

[…] I have also heard the story told differently, though with the same meaning, as read back for verification to the Baghdadi Qurʾan scholar, Abū l-ʿAbbās the Gap-Toothed, whose name is Muḥammad ibn Aḥmad ibn Ḥammād ibn Ibrāhīm ibn Thaʿlab, in his house in Basra in Jumada I 335 [December 946] in my presence and hearing, as follows: You cite ʿAlī ibn Ḥarb al-Ṭāʾī of Mosul, who heard it from Jaʿfar ibn Mundhir al-Ṭāʾī the holy man in Mahrūbān, who said: I was with Sufyān ibn ʿUyaynah when he turned to a Hadith scholar who was present and said, “Tell us the story of the snake!” The man said, citing ʿAbd al-Jabbār:

Ḥumayd ibn ʿAbd Allāh had gone to the place where he practiced his devotions, when suddenly a snake appeared and said to him, “Protect me, that God’s shadow may protect you!”

“From whom am I to protect you?” he asked.

“From a murderous enemy,” the snake replied.

“Where shall I hide you?”

He opened his mouth, and no sooner had the snake slipped inside than up came a man with a drawn sword, saying:

Ḥumayd replied, “I see nothing,” and the man went away again.

The snake poked out its head and asked, “Is he still there?”

The snake said, “I give you a choice. I can either kill you by felling you with a single bite, or I can pierce your liver and make you excrete it in little bits.”

Ḥumayd said, “By God, that’s not a fair exchange!” 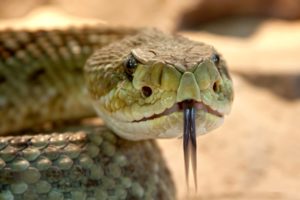 Photo by Foto-Rabe. CC0 via Pixabay.

The snake replied, “You well know the old enmity that is between me and your father, Adam. And in any case, I’ve no money to press on you or horses to reward you with.”

Ḥumayd said, “Give me time to go up on to the mountain and dig my grave.”

“Very well,” said the snake; and Ḥumayd set off; but on the way he was met by a comely youth, sweetly perfumed and handsomely dressed.

“Old man!” said the youth. “Why do you despair of life and yield yourself up to death?”

Ḥumayd said, “Because there is an enemy in my belly who means to destroy me.”

The youth took something from his sleeve and gave it to Ḥumayd, saying, “Swallow this.”

Ḥumayd takes up the narrative:

I took it, and my bowels churned. Then the youth gave me something else to take, and I vomited up the snake from my belly in little bits.

“Who are you?” I asked the youth. “May God keep you in His mercy! Never was I so deeply indebted to anyone.”

The youth said, “I am Benevolence. In heaven they saw how treacherously this snake treated you, and supplicated God, Mighty and Glorious, to keep you from harm. God Exalted said to me: Benevolence, go to My servant; for what he did, he did for My sake.”

« General Editor Philip Kennedy Profiled in The National
The ‘1001 Nights’ Outclassed: The 10th-century Stories of Tanūkhī »