“The Secretarial Art Is a Noble Craft”: An Excerpt from The Sword of Ambition 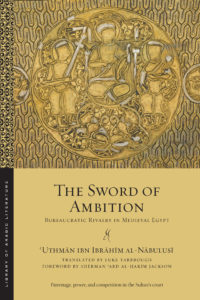 In this excerpt from The Sword of Ambition: Bureaucratic Rivalry in Medieval Egypt, translated by Luke Yarbrough, the unemployed bureaucrat ‘Uthman ibn Ibrahim al-Nabulusi describes what he believes are essential qualifications for being a good secretary. The work as a whole makes a polemical argument against the employment of non-Muslims as secretaries and offers us “an unusual opportunity to situate virulent religious polemic in the particular historical context that generated it,” as Yarbrough writes in his introduction. “The author’s patent desperation and autobiographical candor make it clear that the project was not suggested to him by sacred texts or abstract reflection alone, but instead was inspired by historically specific, self-interested motives.”

A Description of the Secretarial Art

Since the subject of the secretarial art has been broached, and since we have had occasion to mention those who unworthily don its robes and thereby encroach upon its sublime offices, it is fitting that I describe what it is. Indeed, it is appropriate that I bedeck the end of this book with a description of those men whom the secretarial art has adorned and that I offer a sample of their merits.

Therefore I would state clearly that the secretarial art is a noble craft, a splendid and lofty rank for those who master it. He who is ignorant of its excellence has surely never known one of its true practitioners. As for those secretaries worthy of the name, they are in truth the very meaning of existence; they are the kernel within the shell of this present world, the spirit in the body of this creation and the sheen upon its mirror, which reveals all excellence in its perfect clarity.

An Account of Those Men Who May Properly Be Called Secretaries, along with Some of Their Achievements in Prose, Though It Be but a Single Phrase to Demonstrate the Excellence of Each One 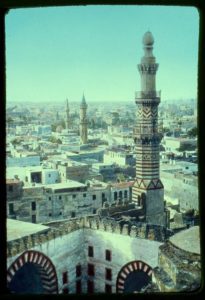 “Cairo from the Mosque of Ibn Touloun.” Public domain via the Library of Congress.

I am of the view that the only men who may properly be called secretaries are those who combine knowledge of divers sciences and who comprehend every branch of knowledge. The true secretary will have recited the Illustrious Qur’an, spent time in the study of religious law, heard and narrated hadith and understood its principles and fine points, studied inheritance law, mastered Arabic, scaled the twin summits of poetry and prose, gained complete command of epistolary style, recounted poems and aphorisms, read the epic tales of old, and understood the nuances of poetry and its varieties and forms. He will have committed to memory a great many poems, by Arabs and non-Arabs alike, and studied their battles, their speeches, their biographies, their historical chronicles, and the record of all events concerning them. He will have learnt a goodly amount of arithmetic. Indeed, he will have entered into every arena of learning by the widest gate. Refined literature holds a singular place in his preparation; it is his special adornment, for the Muslim community knows nothing more lovely, nor is there any garment more comely for ambition to wear. It frees the tongue of any hobble and allows men to speak with supreme eloquence. Only he may be associated with its refinement whose brilliant light shines forth, whose excellence glitters, and whose character is ennobled to such a degree that he gives rest to souls and joy to spirits. Neither does his flowing stream of excellence dry up, nor does any impurity cloud the clear pool of his learning. Fate is moved to rejoice by such men, and in them she displays her kindness. By them the spark of Destiny is kindled; from them the star of Fortune is never concealed. God, glorified be He, has said concerning those angels who in all nobility and knowledge play the part of secretaries: «Yet there are over you watchers noble, scribes who know whatever you do.»

One of the most renowned secretaries and noted men of culture was ʿAbd al-Ḥamīd ibn Yaḥyā, the secretary of the last Umayyad caliph, Marwān, who was killed at Būṣīr Sidr in the vicinity of Giza. ʿAbd al-Ḥamīd was the first to elucidate the proper methods that guide the secretarial art and the use of the pen, and to formulate the conventions of composition and rhetoric. He has many well-known epistles and many praiseworthy virtues as well.

It has been said concerning him, “The secretarial art began with ʿAbd al-Ḥamīd and ended with Ibn al-ʿAmīd.”

Among his excellent sayings are, “The pen is a tree the fruit of which is meaning, and the heart a sea the pearl of which is wisdom.” And also, “Practice forgiveness, that the grace of your power may endure.” And, “Do not let your share in this world cause you to forget your share in God’s mercy.”

Here follows an instance of ʿAbd al-Ḥamīd’s loyalty that history has preserved for us so that the ignoble might feel shame and the honorable might follow in his steps. When his master Marwān realized that his rule was coming to an end with the rebellion of al-Saffāḥ, he said to ʿAbd al-Ḥamīd, “This authority shall surely pass from us and revert to those people,” meaning the Abbasid caliphs, who are of the Prophet’s family. “I advise you to transfer your allegiance to them, for they shall advance you in their service because of your estimable qualities. It may even be that you shall still do me some good by serving those whom I leave behind.” But ʿAbd al-Ḥamīd replied, “How shall the people know that this is your command? If I obey you, the people will curse me!” Then he recited these verses:

Am I to be loyal in secret and flaunt perfidy?

what excuse could I give to convince people?

Thereafter ʿAbd al-Ḥamīd stayed at Marwān’s side until he was slain by Ṣāliḥ ibn ʿAlī.

For more stories of the best—and worst—secretaries in history according to Ibn al-Nabulusi, check out The Sword of Ambition, newly published in paperback.