Entirely Genuine and In No Way Conventional: Muhammad al-Tunisi’s In Darfur

Humphrey Davies, editor-translator of the recently-published In Darfur: An Account of the Sultanate and Its People, by Muhammad al-Tūnisī, came to the book through another Library of Arabic Literature text: Ahmad Faris al-Shidyaq’s Leg over Leg. Davies, an award-winning translator of some twenty works of modern and classical Arabic literature, is also editor-translator of Leg over Leg, as well as Yusuf al-Shirbini’s strange and fascinating Brains Confounded by the Ode of Abu Shaduf Expounded.

Here, in the second part of a two-part interview, Davies talks with M. Lynx Qualey about the more novelistic aspects of this text: the larger-than-life characters, the relationships between fathers and sons, and the women whose lives are both obscured and illumed by the text.

MLQ: For which audiences do you think this will be of particular interest? Certainly any scholar working on 19th-century Sudanese histories, but who else? I thought food-history scholars would be interested, those interested in the sartorial practices of the region, historians of medicine. The material also felt ripe for a Jurji Zaydan-esque historical novelist. 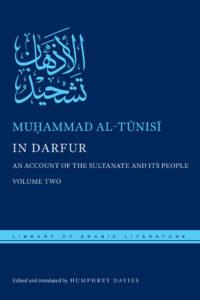 HD: It’s its novelistic aspects that, in the end, appeal most to me. True, the book is a mine of information on a little-known but powerful and sophisticated country still living—though not for much longer— the “innocence” of a pre-colonial existence, but I find the account of the political wheelings and dealings, the hard-fought military campaigns, and the larger-than-life figures that dominate the historical overview given in the first half very compelling. They have the raw energy of the stories that Shakespeare took as material for many of his historical plays and tragedies. Shaykh-Father Muhammad Kurra, perhaps the most important political figure in the kingdom in the late eighteenth and early nineteenth century and one whom the author met, was accused when a young man of dallying with one of the sultan’s slave girls. He went into a room, cut off his genitals, and presented them to the sultan. “Then,” the author notes, “he fainted.” What would not the Bard have done with that?!

MLQ: Well, perhaps some new bard will yet take it on…

How important is this as a historical source? What can we learn from his errors, from what he gets wrong about Darfur?

HD: Al-Tūnisī was the only Arab and Muslim to reside in and write an account of the Sultanate of Darfur. The only others to do so were W.G. Browne (several decades before al-Tūnisī), a grumpy Englishman who didn’t want to be there anyway, and the German doctor Gustav Nachtigal, an insightful and sympathetic observer, who was there on the eve of the invasion and occupation of the country by Egypt in 1874. Al-Tūnisī’s much longer stay, most of which was spent on his father’s estates outside the capital, and his position as the son of a man of learning (visiting shaykhs were honored by the sultans, who saw them as lending prestige to their rule) gave him access to areas of life, and indeed of the country, that Browne and Nachtigal didn’t have. True, he himself sometimes says (as when speaking of human sacrifice and the possible use of a boy and a girl as ingredients in a ragout served at an annual sultanic loyalty jamboree) that there were things Darfurians wouldn’t talk about even with him. But his inquiring mind and youthful enthusiasm (he was 14 when he set off, 22 when he returned) to get out there “and see” (as he puts it) took him far, even to the dreaded cave-prisons of Jabal Marrah, reserved for rebellious princes and courtiers, and to the people of that mountain, who had red teeth and eyes and thought he was a delicacy sent them by the sultan. More sober historians may find nits to pick but given that he is an almost unique witness, I can’t see that those would be many.

MLQ: One of the most emotionally interesting parts of the narrative is the relationships between fathers and sons. The narrative contrasts the cold, indifferent al-Tūnisī father and grandfather with a warm and apparently loving youngest paternal uncle. What genre traditions is he drawing on, besides rihlah literature, in deciding what parts of his life and journey to include and exclude?

HD: The nonchalance with which fathers treat sons in the book is amazing. Two months after the author finally makes it to Darfur and is reunited with his father, whom he hasn’t seen for years, the father abandons him again! Perhaps the explanation lies in the fact that they were long-distance merchants, whose business trips could take them thousands of miles and keep them away for decades, making them emotionally thick-skinned. The sadness and even bitterness this engendered in the author, however, is palpable, even though he speaks of his father with respect and with pride in his claimed scholarly achievements. I am no expert, unfortunately, in the wider field of rihlah literature, and there is a fast-growing body of literature on the expression of emotion in older Arabic works in general, on which I am also no expert. I can only say that the expression of emotion, limited though it may be to a few passages, strikes my ear as entirely genuine and in no way conventional.

MLQ:  It’s also hard for me to reconcile how he talks about Iya Kuri Kinanah or Um Habib (as fully rendered humans) with how women appear in Vol. 2, where “women are at the root of every disaster that occurs” and they are largely stereotypes. What stylistic and tonal differences did you find between the more personal stories in Vol. 1 and the generalizations of Vol 2?

HD: The author often speaks negatively about women, it is true, and not only when generalizing—there is for example the anecdote about the sex-crazed mother of Sultan Muhammad Fadl, who forced herself on one of the author’s friends—but he was by no means alone in this. Few books of this period that I’ve read (Leg Over Leg is the massive exception) make it to the end without taking a sideswipe at the mischief caused by women (and eunuchs, and people of low origin, etc.). It’s part of the cultural landscape. Perhaps more interesting, then, is the fact that al-Tūnisī does acknowledge and seems to respect historical female figures who made a mark. More generally, I think the difference between the two volumes lies more in the purposes of each. The first volume sets the scene by describing the author’s family situation, his journey along the Forty Days’ Road to Darfur, and the political dramas (the wars of succession, the invasion of Kordofan, the attempted power grab—if such it was—by the eunuch Muhammad Kurra) that provided the backdrop to his stay. The second is a systematic description of the country covering governance, clothing, marriage, health, food, animals, flora and fauna, currency, trade, magic, and more.

Needless to say, the second part is more schematic, but it remains very much a personal account. He’s describing personal spirit guardians? He tells of the unintended and unfortunate consequences that befell a friend who acquired one. Plants? He recounts how a Fur woman cured him with a certain weed after chili pepper had blown into his eye. Etc. His personal experience informs and enriches the material. 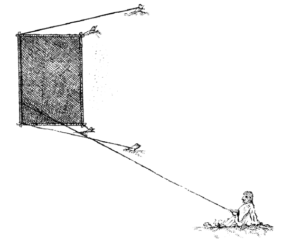 Drawing of a bird trap from In Darfur

MLQ: Al-Tūnisī’s drawings are remarkable; even if not completely accurate, to have remembered so much thirty-some years later is stunning. He also seems to remember local languages quite well three decades on. Do we have any sense of whether he kept a journal at the time, or whether this was all drawn from his memory three decades later? Or would he have asked others who’d traveled more recently to Darfur to shore up his knowledge?

HD: I agree, it was a remarkable feat to recall after all that time how a bird-trap, for example, was set up, or where all the different tribal territories fell on the map of Darfur, or the layout of the sultan’s compound, including just where the house of Maternal Uncle Fazārah (a character who doesn’t even figure in the text) was located and where the girls who ground flour sat. Even more remarkable is his reproduction of phrases, conversations, and even whole songs in Fur. Modern informants, it is true, sometimes had difficulty in understanding these, but that could just as well be due to changes in the language as to a faulty memory. He says nothing about a diary but does mention that when in Cairo later, he met and talked with a man from Takrur (here referring to Bagirmi, a sometime state southeast of Lake Chad) and that he was visited there by the chief judge of Wadai, where al-Tūnisī also lived briefly. That visit took place around 1840, i.e., more than thirty years after he had left, so it seems he kept up contact with people from the region. Perhaps he consulted them when writing his book.

MLQ: What were the challenges of putting this together—the editing, the translating, the research into Darfur in the early nineteenth century?

HD: All of the above (as with any book). The language, as mentioned, is unusual (though unlike most Arabic dialects, Sudanese does have a serious dictionary, by Awn al-Sharif Qasim, which was helpful), the editing issue being then how much of that roughness to retain and how much to correct. I took the approach that the text should be left unchanged so long as it was comprehensible; it will read, therefore, less smoothly that the excellent edition made by Egyptian scholars Khalil Mahmud Asakir and Mustafa Muhammad Musaad in 1965.

The translating likewise required the preservation of a degree of orality that would fit with the language. And the material was, indeed, arcane and in need of research in many aspects. Fortunately, I had the support of Rex Sean O’Fahey, the doyen of historians of Darfur, both through his works on the subject, which are fundamental, and his availability for Skype conversations.

MLQ: What are you most curious about, about the composition and process of creating the book? If you could conjure up Perron and al-Tūnisī, what would you ask them about it?