In this excerpt from In Darfur, translated by Humphrey Davies, Muḥammad al-Tūnisī recounts how, at age 14, he decided to travel from Cairo to Darfur in search of his father. The uncle who had been caring for him leaves Cairo on pilgrimage, and al-Tūnisī finds himself alone and penniless: 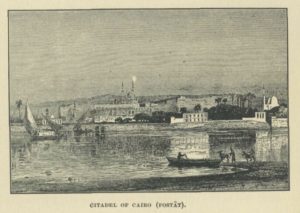 My uncle therefore went to the Hejaz, leaving me in Cairo to continue my studies at al-Azhar with enough money to last four months, but he stayed there longer than that. I ran out of money and could accomplish nothing—I was in the prime of my youth at the time—and found myself at a loss, not knowing what to do and scorning the idea of abandoning my studies and learning a craft. While thus at a loss and surviving in straitened circumstances due to my lack of wherewithal, I heard that a caravan had arrived from the Land of the Blacks, from Darfur—for which, we had heard earlier, my father had left Sinnār, accompanied by his brother. When the caravan had settled itself at the Caravanserai of the Jallābah, I went there to ask after my father, to find out if he was still alive and might yet arrive, or had been placed in the bare-walled vault on his demise. By coincidence, I came across a man—elderly, imposing, and dignified—called Sayyid Aḥmad Badawī, who was with the caravan. I kissed his hand and stood before him for a while, until he asked me gently, “What do you want?” I replied, “I’m looking for a man I know who has disappeared into your country. Perhaps one of you knows him and can guide me to him.” “Who is he?” he asked, “and what is his name?” “His name is Sayyid ʿUmar al-Tūnisī, and he is a man of learning,” I replied. “It so happens that you’ve come upon one who knows him well!” he said. “He is my friend and no one knows him better than I. I see a resemblance in you to him. I think you must be his son.” “I am,” I answered, “though my outward appearance is changed, my inner self deranged.” “Then what prevents you, dear boy,” he next asked, “from setting off to seek your father and finding, when you meet him, joy?” “Lack of means,” I replied, “and of provisions and the necessary gear.” “Your father,” said the man, “is regarded by the sultan as a very great man and is among those to whom he is most generous, more than any other at his court. Should you wish to go to him, I’ll take care of your provisions, your mount, and your comfort till you reach him and stand before him.” “Do you really mean that?” I asked him. “By the life of the Messenger, I do!” he replied. “Your father once did me a favor I could never repay were I to spend all that I own, every penny I possess.” “I am your obedient servant,” I said, “and will follow you in everything.” I therefore made a pact with him to that effect, and gave him my word then and there, and took to visiting him often until he was ready and told me, “Tomorrow we leave. Spend the night with us, if you like, so we can make an early start!” to which I replied, “That will I do, with all my heart!”

I spent the night at his lodgings in the most luxurious and comfortable of circumstances and best and happiest of states till morning came and the air was suffused with light. We rose for the prescribed prayer and performed it, and uncovered the camel litters and brought them out. Then the camels were brought and the loads put on them so that before the sun’s disk could peep above the horizon, the loading was done and the golden-white camels had set off at an easy stride, which they kept up until they were kneeled at al-Fusṭāṭ, on the banks of the Nile, and the men set about loading them onto the boat, till all were on board. Then we waited till we’d performed our Friday prayers behind the imam, and went on board, having bade Cairo salaam.

« LAL on Tour: Catch Us in Beirut or at the ADIBF
War Songs Featured in The Paris Review and Seedings »