Did Poetry Die?: The Unrelenting Fire of War Songs

In her novel The Secret History, Donna Tartt writes about learning a classical language. For her, each language has a different character, each with a different idea of “fire.”

“I can only say that an incendium is entirely different from the feu with which a Frenchman lights his cigarette, and both are very different from the stark, inhuman pur that the Greeks knew, the pur that roared from the towers of Ilion or leapt from the funeral pyre of Patroklos… How can I make you see it? This strange harsh light… inarticulable in our common tongue?” 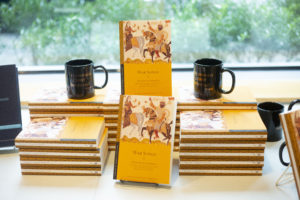 A similar sensation passes over the modern reader of War Songs, a new translation of poetry by the sixth-century Arab warrior-poet ʿAntarah ibn Shaddād. ʿAntarah’s world was a bleak and violent one, where man stood alone against the elements. In Arabic, the word for fire is nār (نار‎). In Antarah’s poetry, this nār is unrelenting. It bakes the earth during the “snarling days.” It springs from dawn raids and flashes on the Indian steel of the soldiers’ swords. At night, that same nār surrounds a “fortress near the stars,” crackles from “the fires of War” stoked high and shines on the armor of “troops blazing / through the darkness / like embers.”

Through his translators Montgomery and Sieburth, the power of ʿAntarah’s poetry is unchanged by time. He still transports his reader to another world, but be warned: it is a bleak landscape washed in this burning light, more recognisable to readers of post-apocalyptic fiction than of ancient poetry.

“The cosmos of the pre-Islamic qasida poets is stark,” the translators warn us in their introduction. “Everything is governed by Time (or Fate)… [but] at the heart of the cosmos stands man.”

The bleak landscape amplifies the human subject: their courage and loves, their loss and their longing. In this bare cosmology, the figure of the warrior-poet rides alone through a bleak land, through abandoned encampments and the crumbling remnants of the past, ongoing battles and raids, all of it taking place in the endless flat plain of the desert. The elements are simple, but what arises from them is a poetry of astonishing variation and color.

In Europe, ʿAntarah would have been a knight. Like the European knightly class, he was part of a society that valued manly virtue (muruwwah) and honour (ʿirḍ) in its fighting men. His poems are everywhere infused with brass and machismo; violent poetry for a violent time. Spines are torn out, noses are cut off.

“My steeds live for War,” ʿAntarah warns in one poem. “My swords are not for show.” In another, he boasts “I felled him / that champion / amid rusty armor / and severed heads. / The vultures waited / on him like maids / attending a bride.”

By the time he died, ʿAntarah’s society, his culture, and the very definition of poetry in the Arab world had undergone sudden and turbulent change. “Like the society the warrior-poets lived in,” the translators tell us in their introduction, “poetry was in a state of turmoil.” But this turmoil had given rise to the new poetic form of the qasida, and an “an astonishing variety of experimentations, manipulations, conceptualizations, and imaginings.” 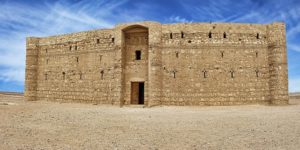 Indeed, ʿAntarah’s poems are not only songs of war. In a landscape scoured by battle, the knight-poet also absorbs the melancholy sight of abandoned campsites, sacked towns, and ancient courts with beautiful and tender touches. The ruins of the past act as a counterpoint to the fury of battle. They are lonely places where a man confronts the passage of time and the prospect of his fate. The ruins are “tired playthings / of Time / and the thunder / and rain.” Where great houses once lived, the crumbling ruins of their halls come to represent the falling fortunes of man and the hand of Fate moving tirelessly over the world.

You can’t visit them now—

Ruins are places of contemplation where ʿAntarah can escape to mourn his lost love ʿAblah. They are scars on the landscape: Like Ṭarafah, another great pre-Islamic poet, ʿAntarah uses the image of the ruin as an old tattoo inscribed on the landscape, half-faded on the skin.

on a bride’s wrist,

The ruins are even places that can be spoken to, and listened to—but we don’t always know how to speak their language. “The ruins were deaf—refused to reply / then shouted out in a foreign tongue.” Ruins in the poems of War Songs are open-ended signifiers which leave open the question of causality, and which evade easy interpretation.

The motif of the aṭlāl (“ruins”) is as old as the qasida as a form, and features in the work of a great many pre-Islamic and later poets. The trope was so ubiquitous that the later poet Abū Nuwās (ca. 762–813), famous for his thirst for wine and his love affairs with men and women, openly mocked other poets’ constant pondering over ruins:

“The wretch paused to examine an abandoned campsite,

While I paused to inquire about the neighbourhood tavern.

May God never dry the tears of those who cry over stones,

Nor ease the love-pangs of those who cry over tent pegs.”

Despite an obvious fondness for the romantic evocations of ruined places, ʿAntarah can also find their melancholy solitude at odds with the manly cries to battle that fill many of the other poems. In his poem “Damn the Ruins!” this tendency reaches its utmost.

“Damn the ruins! Damn you!

Stop dwelling on the past again.

Damn you! Stop all this talk—you

won’t ever get the sweet times back.”

In the lines that follow, ʿAntarah exults in the force of battle, in all its noise and tumult, and juxtaposes this with the quiet and peace of the ruined sites. But where ʿAntarah differs from his peers is in viewing the ruins as non-static entities. They too are subject to the ongoing deteriorative forces of time and weather, just as the human characters in the poems.

and the East Wind blew.

T.S. Eliot, in his essay “Tradition and the Individual Talent,” describes tradition as taking place within a “historical sense,” an appreciation “Not only of the pastness of the past, but its presence.” Ruins in ʿAntarah’s work convey this paradox in material form: they are timeless but also wear the passage of time; they remind man of his mortality but reassure him that many things will last long after he is gone: his victories, his courage, and his poetry.

Indeed, ʿAntarah argues for poetry as a kind of ruin, a remnant left behind that will linger long after the death of the poet. In the collection’s opening ode, he asks “Did poetry die in its war with the poets?” The fact that fourteen centuries after his death, we are able to read the work of ʿAntarah ibn Shaddād and still lose ourselves in that world, baked in the harsh desert sun and crackling with the fires of war, proves that it did not.

Paul Cooper is an author from the UK. He is currently studying for a PhD at the University of East Anglia (UEA), and his first novel River of Ink was published in 2016.