Marcel Kurpershoek, editor-translator of ‘Abdallah ibn Sbayyil’s Arabian Romantic: Poems on Bedouin Life and Love, first became acquainted with Nabati poetry in the 1980s, while working as a diplomat in Saudi Arabia. He has also translated Hmedan al-Shweʿir’s Arabian Satire: Poetry from 18th Century Najd and is currently a senior research fellow at New York University Abu Dhabi, where he specializes in the oral traditions and poetry of Arabia. He has written the five-volume Oral Poetry and Narratives from Central Arabia (1994–2005).

In this second part of a back-and-forth that took place over email, Kurpershoek discussed what is unique about Ibn Sbayyil’s work and the translational challenges of bringing it into a contemporary English. The first part of the two-part interview can be found here. 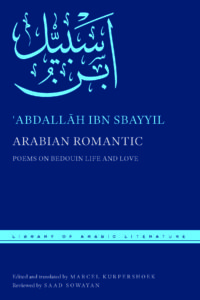 An important part of the poetry, as with Hmedan’s, is how Ibn Sbayyil turns himself into a character (a lover, a chaser-of-women, a sometimes-desperate appreciator-of-women’s-forms, a spurned adorer). Is this one of the reasons for his popularity, his overall poetic personae, rather than the particularities of any individual work?

MK: He is much subtler than [his predecessor] Hmedan [al-Shwe’ir]. It is basically introspective: the emotional arc of his poem’s trajectory, from despair to joy and confidence to resignation and vice versa, and so on. You might compare it to self-therapy of love sickness. This may somehow reflect a real sense of spleen or longing, though it is mostly playful and therefore ambiguous, which is the safe way in that society I guess. Indeed his extended similes on the subject of a lover’s agony are much admired.

You suggest that Ibn Sbayyil is the most prominent representative of the High Najd’s Romantic School, and at times he was credited for other poets’ work. What distinguishes his poetry from that of the other “champions”? If someone were to show you a poem, how would you begin to guess whether it was Ibn Sbayyil’s or someone else’s of the time? Are there particular characteristics that a close reader would look for in trying to separate them? If they were trying to guess if a poem was a “genuine Ibn Sbayyil”?

MK: Poem 7 was never included in any edition; I found it in a manuscript. Perhaps it was excluded because it is sexually more explicit. Still, I’d recognize it as Ibn Sbayyil’s, I’d like to believe. To explain why you’d need another essay.

Some of the extended similes are really wonderful, particularly those with animals. Many of the ways of characterizing women’s forms feel worn, and make the women appear the same in poem after poem. Are the longer metaphors his individual stamp? Such as at 2.20, where the camel is running with the bucket, or, “In the kitchen, cooks jostle about like thirsty camels pressed around a waterhole.” And, in a different way, the vividness of the gossips’ throats being eaten out by syphilis and scrofula.

MK: Some of it is actually quite original, such as the comparison of her gait with the slow steps taken by the imam when he measures the shade in order to determine the time for the afternoon prayer. And I am sure there is much more.

Hmedan talks about wives and family, but Ibn Sbayyil does not—except I believe he talks about fellow poet Mutawwa Nifi’s wives, Tarfah and Nurah. Is this true of the Romantic School in general that wives don’t feature?

MK: Well, this shows you how much individuality there can be in the work of Nabati poets who partake of the oral tradition and junks the view that it is just reshuffling the Lego pieces of convention. Hmedan is of course unique in this sense: he depicts himself as part of Peyton place theatre in 18th century poetry. Ibn Sbayyil’s way in this respect is more conventional. The Bedouin romantically enchanted him whereas Hmedan was utterly hostile to the Bedouin: perhaps in his time they were more likely to fall victim to their rapacious ways. 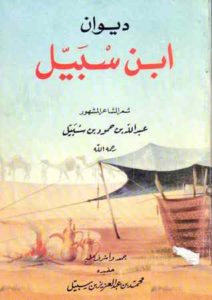 An edition of the poetry of Ibn Sbayyil from 1988, via Goodreads

So you talk about him corresponding with Nifi and others, and yet—while Ibn Sbayyil was literate—this was primarily an oral culture. If they weren’t keeping in touch through the written word, how did it function? A traveler memorized the poetic correspondence, and then recited it to the recipient upon arrival?

MK: Exactly. The correspondence is not written but memorized and recited (or recited in his presence and then memorized). If there is a literate person who happens to be present, he may wish to write it down, as the interactions between oral and literate culture are endless.

Alois Musil recorded the poem around 1910; it was recited to him. I try to explain why his version, the oldest we know of, seems less accurate than what we find later in manuscripts. Musil was far north from Nifi and Central Najd, and it may have been mangled in transmission. Whereas those close to Ibn Sbayyil and his family presumably kept more correct versions.

When you translated, did you try to reflect meter, and the differences between the styles of the different poems? When translating, what aspects of how it functioned in the original — what it did for the reader—did you most want to capture?

MK: Not consciously, but unconsciously perhaps yes. I dress in the Arabic as a gown, smell it, feel it, and then look for words to reflect that.

Is this your philosophy of translation, as it were? To immerse yourself as deeply as possible in the original and then grope for the ways in which to re-craft that?

MK: In crucial issues as these I just follow my instincts: reflecting upon it is dangerous and might kill the vital spontaneity. Better not to think about how you breathe or how you digest your food. Cherish your irrational functions.

Were there particular translational challenges this collection brought different from Hmedan’s work, or other poetry you have translated?

MK: I had to steep myself into the language of ghazal, not only the vocabulary but also the allusions and associations that are part of it for those who are in the know about the tradition – a bit like one must know the mystical concepts when you translate Sufi poetry. Without that background, one can go awfully wrong.

Could you give an example of how one might go wrong? Is it also necessary to study English-language poetic traditions (for instance how ghazals have been written in English?), when translating into the English, in order to re-create the poetry more fully in English? 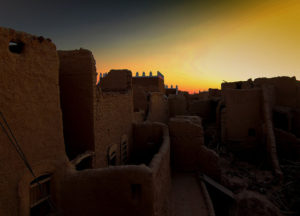 The town of Ushaiger, in the Najd region of Saudi Arabia. By hamza82. Creative Commons via Flickr.

MK: I confined myself to Arabic ghazal, including of course a lot of English translation of it. The ghazal in this book is a game of hide and seek. As I argue, you can never exactly tell when Ibn Sbayyil and his neighbor, al-Muṭawwaʿ are quite serious or speak tongue-in-cheek. You could argue that this in itself is a protection mechanism since if the audience took everything literally and dead serious they would be ostracized. But as I mention in the note on the evening session with a departing tribe and Mijmāj’s poem it seems that this kind of ghazal was accepted as a pleasant social pastime. In it are hints at other realities, like tribal relations, but in this kind of ghazal these hints can be included in a soft way, without risky sting. And the subject of love and passion is always of interest to people no matter where. In Arab tribal society, it is especially relevant because of the customary first cousin marriage: I give the example of the poets al-Mijmāj and al-ʿWēwīd, where the second won the bride of his choice because of closer family relation: the father instead of the mother. This poetry was a kind of safety valve enabling disappointed lovers to vent their feelings in an acceptable way. All speculation, of course.

Examples: I mention Jacobi’s lack of understanding of a metaphor in a pre-Islamic poem and I remember in 6.13, “I beg for tenderness, and she chooses to drive me mad,” but you’d have to refer to the Arabic: literally it is: he (she) made my run-away camel run away, while at first I thought it meant “I beg for tenderness and the return of my run-away camel.” The poet assumes that everyone knows that the “run-away” (even the word for camel is implicit) refers to the poet’s heart that went missing (in search of the beloved). Of course, a Bedouin whose camel went missing would go in search of it and ask other Bedouin if they had seen a camel so and so and with that brand and so on. It is all about allusion, metaphor, and simile. The very notion of ṭard al-hawā, “hunting after passion” has to be understood in the classical context of amorous passion as a chivalrous game, like the courtly love of the troubadours.

If someone were to leap off from this study, what areas do you think would be most interesting to examine?

MK: I think a more comprehensive study of the Romantic School would be a nice subject. But any such research is hard because it necessarily involves fieldwork and fluency in the tradition and language, not to speak about obtaining the necessary permits. Probably studies like mine (and Saad’s) will remain scholarly orphans.

Who do you imagine reading this translation, and the research in your notes? Who do you think this volume will be most of interest to? Who did you most want to reach with it?

MK: The community of scholarly Arabists. People like me, essentially. Ideally, it should be possible to read it at two levels. The other being people with a broader literary and cultural interest, for instance in the subject of ghazal and love poetry. There is a lot of social and anthropological context as well that might be of interest for students in those fields. The most important thing is that now this body of work has been edited and translated and commented upon according to the state of the art, and that it will be preserved for future generations. With this work that is not a forgone conclusion, because the community of specialists is exceedingly small and there are no institutions dedicated to perpetuation of these studies. Its survival hangs by a very thin, tenuous thread while its importance and uniqueness should make it a high priority.

« Arabian Romantic: A “Linear Descendant” of Early Arabic Classics
James Montgomery on When ‘All Poets Were Warriors’ »