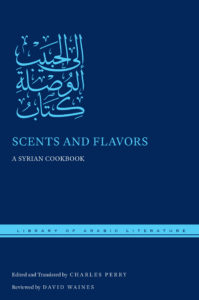 ill be publishing Scents and Flavors: A Syrian Cookbook, edited and translated by culinary historian Charles Perry. The text, Kitab al-Wuslah ila l-habib, was a collection of 635 recipes compiled by an anonymous author in 13th-century Syria. Judging by the number of extant manuscript copies, it was a popular cookbook.

The text is a fascinating window into Middle Eastern cuisine seven centuries ago—particularly in how its reflect the importance of fragrance to garnish both food and diners (there are separate sections on how to make perfumed soaps and breath-sweeteners.) At the same time, it includes herbs and flavorings that we don’t normally associate with modern Levantine cuisine.

To give readers a taste of what’s to come, below we’re presenting a recipe from the book, for Jurjāniyyah, or Chicken in Mustard-Yogurt Sauce, which Charles Perry has reworked for contemporary kitchens. Over the next few weeks, in the run-up to the book’s publication, we will be putting more of these recipes here on the blog, so please stay tuned! You can pre-order the book here.

We’d love to hear from you if you’ve tried these recipes out at home.

The sauce gives a pungent impression like horseradish, but with the special fragrance of yogurt and the enrichment of pistachios. The name of the dish, Jurjāniyyah, implies that it comes from Gorgan, a region in Iran.

Note: Dairy milk yogurt needs to be stabilized before boiling or it will curdle. (Goat’s milk yogurt does not have this problem because of its high butterfat content.) Middle Eastern cooks warn that when you’re boiling yogurt you should stir consistently in one direction to reduce the risk of curdling.

1 quart unsweetened yogurt, preferably without additives such as gelatin or carrageenan

1 egg white, whisked with a fork

Force the yogurt through a wire strainer into a saucepan. To stabilize it, stir in the egg white and dissolved cornstarch, stirring consistently in one direction. Set over high heat and continue to stir in the same direction until bubbles start to appear at the edges, then reduce the heat to medium-high and stir until the mixture starts to boil, as shown by a heaving foamy consistency, about 10 minutes.

Stir in the sugar and 3½ tablespoons mustard, pressing the mustard against the side of the pan with your spoon to make sure it dissolves evenly. After two or three minutes, taste the sauce to see whether you like the degree of pungency and add the remaining half tablespoon mustard if desired. Remove the saucepan from the heat and let the chicken pieces sit in the sauce for five minutes to warm up.

Arrange the chicken pieces on serving dishes and ladle yogurt sauce on them. Divide the pistachios (and pomegranate seeds, if available) among the portions and sprinkle on top.
–Charles Perry

« al-Maʿarrī’s verse in song in London
Meatballs with Whole Garlic Cloves and Pomegranate Chicken! Recipes from Scents and Flavors: A Syrian Cookbook »