Consorts of the Caliphs Set to Ballet 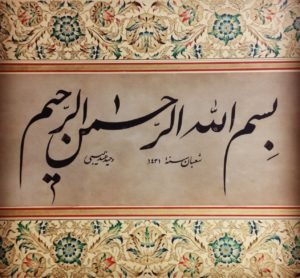 In a recent essay for Tamawuj, Marina Warner describes how, after writing the foreword for LAL’s recently released Consorts of the Caliphs paperback, she felt compelled to communicate the stories of the qiyan to a broader audience. Ballet, Warner imagines, provides the perfect medium to tell these stories, with the dancers’ “curvilinear arcs and feats of vertical balance” that evoke arabesque design (for which a central pose in classical ballet is also named). “Arabesque designs,” says Warner, “aren’t in motion, but the rhythmic patterns and variations make them seem to be, and the pulse comes to an end only when they meet a border or frame, strongly implying that otherwise they would extend ad infinitum in space and time.” Further, ballet mimics ornament and calligraphy due to the “dancer’s implied gliding and soaring, which echo the strokes of Arabic calligraphy as the scribe’s hand dances across the page.”

Warner is currently working on a series of ballet scenes of stories from Consorts to weave together these concepts of literature, dance, design, and calligraphy.

You can read more about Warner’s experimental dance project, in her own words, here on the Tamawuj site!

tamawuj.org is the online publishing platform of Sharjah Biennial 13. Throughout 2017 it has been commissioning a continual series of essays, short fictions, and audiovisual materials in relation to the biennial’s four keywords: water, crops, earth, and culinary.

« “A Dinner of Words, Devoid of Food”: Philip Kennedy on Ibn Butlan in The National
Jūdhābat Tabbālah Recipe from Scents and Flavors: “It Comes Out Very Nicely” »