Leg over Leg is shortlisted for the National Translation Award 2016! 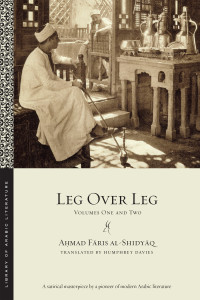 We are proud to announce that the American Literary Translators Association (ALTA) has shortlisted Leg over Leg for its National Translation Award in Prose, declaring:

“Humphrey Davies’ masterful translation of Faris al-Shidyaq’s Leg over Leg is the English-language reader’s first introduction to the work of this foundational figure of Arabic letters. The protagonist leaves his native Lebanon to make a life for himself elsewhere as an itinerant scribe, poet, translator, editor, and author. This is a book about books, about conventions of writing, reading, bookmaking, cultural creation and crossings, bristling with puns and long digressions about the “oddities of language, including its rare words”—a preoccupation that makes Davies’ translation all the more remarkable as a work of literature and scholarship both.”

The NTA is the only national award for translated fiction, poetry, and literary nonfiction that includes a rigorous examination of both the source text and its relation to the finished English work. The winner will be announced next week at the ALTA conference in Oakland, California, from October 6-9. Congratulations to Humphrey and the LAL team for this feat!

« Coming soon this Fall!
An interview with Bruce Fudge: A Hundred and One Nights and the “tip of the iceberg” of popular Arabic tales »