Brains Confounded is named a Recommended Read for 2016! 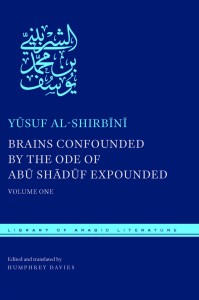 Witty, bawdy, and vicious, Brains Confounded belongs to an unrecognized genre from an understudied period in Egypt’s Ottoman history, and is a work of outstanding importance for the study of pre-modern colloquial Egyptian Arabic, pitting the “coarse” rural masses against the “refined” and urbane in a contest for cultural and religious primacy, with a heavy emphasis on the writing of verse as a yardstick of social acceptability.

Check out the full synopses for Volume One and Volume Two here… and pre-order your copies now!

« An interview with Beatrice Gruendler on “sleepless nights” spent translating The Life and Times of Abū Tammām (Part Two)
Abū Tammām in Leiden! »