New Books from the Library of Arabic Literature: Fall 2014 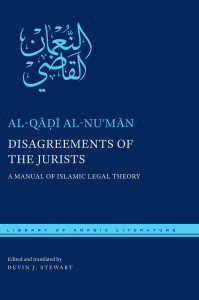 e are delighted to announce the recent publication of some new titles in the Library of Arabic Literature—in this case, two important works on Islamic biography and law:

The first is Disagreements of the Jurists: A Manual of Islamic Legal Theory, by al-Qāḍī al-Nuʿmān, edited and translated by Devin J. Stewart. Al-Qāḍī al-Nuʿmān was the chief legal theorist and ideologue of the North African Fatimid dynasty in the fourth/tenth century. This text, the Kitāb Ikhtilāf uṣūl al-madhāhib, represents his major work on Islamic legal theory. While its immediate mission is to pave the foundation of the legal Ismāʿīlī tradition, the text also preserves several Islamic legal theoretical works no long extant and thus throws light on a critical stage in the historical development of Islamic legal theory that would otherwise be lost to history. 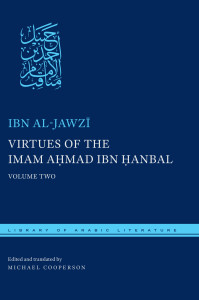 The second publication is Virtues of the Imam Aḥmad ibn Ḥanbal: Volume Two, by Ibn al-Jawzī, edited and translated by Michael Cooperson. This book represents the second half of the biography of Ibn Ḥanbal penned by the Baghdad preacher, scholar, and storyteller Ibn al-Jawzī (d. 597 H/1201 AD). This second and final volume gives a vivid account of Ibn Ḥanbal’s legendary confrontation with the caliphal Inquisition, the Miḥnah, including his imprisonment, trial, and flogging. Ibn Ḥanbal’s resistance influenced the course of Islamic law, the rise of Sunnism, and the legislative authority of the caliphate.

Both books are available in bookstores or via online booksellers, as well as on our website.

« More material on Ibn Fadlan and Mission to the Volga on our Book Extras page
An interview with Tom Shakespeare: “Abū l-ʿAlāʾ al-Maʿarrī through the lens of disability studies” »