Live from All Souls College, Oxford: A workshop on the Library of Arabic Literature

Missed LAL’s “A Corpus, Not a Canon” event in Oxford last month? You can now get the inside scoop thanks to our Arabic Literature (in English) correspondent. Preview some of the highlights in “Consorts of the Caliphs”: History Through the Writings of 39 Women, which quotes LAL Editors Philip Kennedy, Shawkat Toorawa and Julia Bray, as well as NYU Professor Richard Sieburth, as they discuss both the just-published Consorts of the Caliphs and the series at large as “consciously non-canonical and collaborative” efforts; and hear what Humphrey Davies and Aḥmad Fāris al-Shidyāq’s numerous fan club have to say about their intricate wordwork in What Does It Matter If ‘Leg Over Leg’ Is the ‘First Arabic Novel’?. 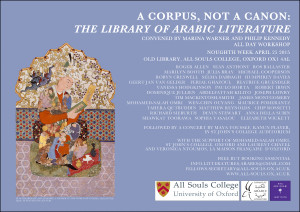 If you want to follow the entire workshop in full, you can also tune in to the following podcasts for a live recording of the day’s panels:

« Join us at the Abu Dhabi International Book Fair this weekend!
LAL at Cambridge Qur’ān Seminar 2.0 »