“In translation, two heads are better than one”: Shawkat Toorawa on Consorts of the Caliphs (Part 2) 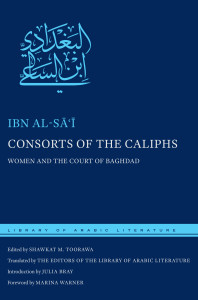 Are there any downsides to working on Consorts of the Caliphs as a collaborative translation? As a procedure and as a product?

No. It takes longer, I think more things need to be negotiated, but that can never be a bad thing, not in translation anyway. Inevitably, if there are an even number of people, you can get deadlocks, and therefore you need to have concessions if you’re going to do it productively. It ends up making you decide what matters, what “battles” count for you.

In my introduction, I say that one of the reasons the scribe could not have known the material very well is that he misunderstands some things. I only know that about material from a period I know. I would not have noticed that about another period. But Michael would’ve. Or Julia would’ve.

That’s more at the level of content than it is of the process of translation, but it’s also true of translation generally—people will recognize an allusion or a turn of phrase or a poetic line. So there’s great virtue in having collaboration for that reason as well.

What about the argument that Leg over Leg, instead of Humphrey doing it, as a whole piece, if people had been doing it collaboratively, it wouldn’t have been as good?

With something like al-Saq ‘ala al-Saq [Leg over Leg], what you do want is someone with a vision of the text and of the kind of English in which that text is going to be rendered. Which is Humphrey. Some people who have that vision may not be good translators. It so happens that Humphrey is a gifted translator, but it’s fair to say that Michael, as his LAL project editor, was not uninvolved. Michael vetted every word. So there is a collaborator, just not an equal collaborator, in terms of involvement. I would say that if Humphrey had made a decision to translate it collaboratively with Michael Cooperson, it would’ve been a richer translation, because two heads are better than one, in translation. But it would have taken at least twice as long.

The argument against that is the premise of a vision. Would Gregory Rabassa have done a better job if he was collaborating on Marquez? Probably not. But that’s about vision. So it depends on whether one means the nuts and bolts of translation when one says “better” or whether one means the vision. Because it was the case that Consorts of the Caliphs looked and sounded odd until Julia, then I, went in and gave it a certain consistency, which can only come from one person doing that. In the end, someone has to do that.

What sort of texts work with collaborative effort?

I think potentially anything. But there are practical constraints, and one of them would be size. I believe a group can translate anything as long as the entire group is reading everything. If you are assigned pages 1-50, that’s fine, but if it’s a 500-page work, you have to have a stake in pages 51-500. If you don’t, then the translation gets too atomized. Unless it’s a work that’s really truly completely piecemeal.

The problem is, as Jamal Elias pointed out in a question at the gig that we did at the Penn bookstore: Can it work if it’s not a bunch of friends? I think what I said was, It can. It’s not about being friends. It’s about going in and understanding you don’t have to win. You just have to be willing to negotiate.

When I translated one line about ‘Abla in ‘Antara, I used the word shift to describe her top. It’s a very sexual term. Tahera thought I was taking liberties. I said, Tahera, I want my reader to picture this beautiful woman. Saying tunic or topcoat is not going to work. Of course there was the question of whether shift is recognizable, but I wanted a nightgown term that would work in a pre-Islamic Arabic poem.

Tahera didn’t get grumpy. She was and is willing to continue this conversation, because collaboration is a negotiation.

The reason you wouldn’t translate collaboratively with every text is it takes too much time?

I wouldn’t say it takes too much time—I think if you’re committed, you’re committed. I would call it practicality. And we can’t forget that many of us are in the academy. People don’t get credit if they collaborate on a translation. There’s pressure to be the hero and the sole translator. I personally have absolutely no problem collaborating on a poem and saying that eight of us translated it, I just don’t care. But you can’t deny practicalities, only one of which is time.

Al-Muwashsha is one we’ve just started on. All we’ve done so far is we workshopped the first two pages. It took us half a day, but it was crucial in order to set the tone for how we’re going to approach the text.

One of the discussions that was really interesting was Michael [Cooperson] suggesting that one of our potential models be nineteenth-century how-to manuals on comportment and behavior. And others asked: How do you know that’s the tenor intended here?  Determining something like this is really important, as it’s going to determine the tone and tenor of the English. And there’s questions like how do we deal with terms that have been famously difficult to render, like adab and zarf? Do we decide that zarf means elegance, do we decide that adab means behavior?

It’s really very important. The idea that ten or eleven people are sitting together in a room for half a day were able to get through maybe 20 lines of Arabic may sound daunting or even unproductive, but the fact is that for us it’s very reassuring about our process.

In fact, we’re hoping that it encourages people all over the planet to do this kind of thing: to get together with two or three or more people, sit down, and to set about translating collaboratively.

Do you think LAL is having that effect?

I think it’s still too soon to say. People who sign on to LAL do realize the virtues of the model.

I think it’s going to create—maybe a generation is too big a word—but a tabaqa of people who realize that, yes, this is the way properly to do things. The problem again is the academy. If the academy doesn’t reward it, then there’s going to be no incentive professionally, which is why we don’t let people who don’t have tenure do stuff for us. We have a lot of young scholars wanting to contribute, but we’ve said, “Look, we don’t want to contribute to your not getting tenure.” But we’re hoping to change the way the academy thinks, and get it to value editing of texts and translation for what it is—scholarship.

Ask me again in ten years.

« In the footsteps of powerful slave and free women of Baghdad: Shawkat Toorawa on Consorts of the Caliphs (Part 1)
Upcoming event: LAL paperback launch with Amitav Ghosh, Elias Khoury and Sinan Antoon »