Announcing the Library of Arabic Literature’s Fellows of 2015

In January, the Library of Arabic Literature inaugurated a new fellowship program

umphrey Davies (Ph.D. UC Berkeley) is one of the most distinguished translators of Arabic literature, both pre-modern and contemporary. For LAL, he has edited and translated Ahmad Faris al-Shidyaq’s so-called “untranslatable” proto-novel Leg over Leg (al-Sāq ʿalā al-sāq) to great acclaim—his translation has been called “a heroic achievement” (Banipal Magazine) and “a triumph” (Los Angeles Review of Books). Davies will be using his LAL Fellowship to work on an edition and translation of a work by the 19th-century author Muḥammad ibn ʿUmar al-Tunisī. 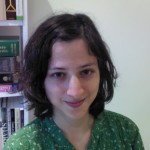 Sophia Vasalou has a Ph.D. in classical Islamic theology from the University

of Cambridge. She is the author of Moral Agents and their Deserts: The Character of Mu‘tazilite Ethics, which won the Middle East Studies Association’s Albert Hourani Book Award in 2009. She has previously held research fellowships at Gonville and Caius College, Cambridge, at the Orient Institut Beirut, and at Oxford Brookes University

. Vasalou will be using her LAL Fellowship to prepare a translation of a work by 4th/10th-century authors al-Tawḥīdī and Miskawayh.

« LAL at Cambridge Qur’ān Seminar 2.0
Re-membering: How to assemble a corpus of classical Arabic literature »