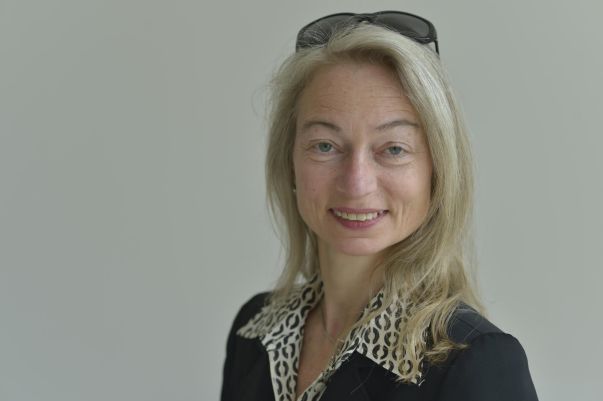 Beatrice Gruendler, editor-translator of Abū Bakr al-Ṣūlī’s The Life and Times of Abū Tammām (2015), is Professor of Arabic at Freie Universität Berlin. Her books include The Development of the Arabic Scripts (1993), Medieval Arabic Praise Poetry (2003), and the collection Classical Arabic Humanities in Their Own Terms (2008), which she edited with the assistance of Michael Cooperson.

Abbasid-era poetry, Gruendler said in a Skype interview, can read to the uninitiated more like a math problem than literary art. “In order to bring it across in teaching,” Gruendler said, “I always chose the situations in which the poetry did something.” That’s exactly what The Life and Times shows: the function of poetry in ninth-century Baghdad.

In Part One of this interview, Gruendler discussed why al-Ṣūlī’s text contains so much about the world of Abbasid-era poetry. This second part examines issues of translation and teaching this work.

What sort of audiences are you thinking about for this book?

I’m thinking of three types of readers. There’s the professor of French—or the journalist who wonders about the role of the IS praise poets, and they want to gain an impression of how Arabic poetry worked. They would just read the translation.

Then there are people who know some Arabic, but not enough to read this text in the original. They would read the translation, but, now and then, when they like a line, glance over and see how it sounds in Arabic. The LAL facing-page editions make this possible. Even if your Arabic is spotty, you can glance across and say: That line is that line and that’s that in the original. It is a bridge text that encourages people to try this kind of literature, which is technically not easy.

It’s also for more advanced students—or also colleagues unfamiliar with poetry. For instance with Joe Lowry’s text, [al-Shāfiʿī’s The Epistle on Legal Theory], I would understand the words, but not the legal meaning. Somebody who is good in Arabic philosophy would not necessarily understand poetry. So colleagues who want to get a sense of the poetry could use this edition. They would understand a lot of it in the Arabic, but here and there they would wonder, “What does that actually mean?” So they glance over to the English.

For instance, I’ve read with students the story in which al-Ṣūlī complains about his books being plagiarized, and says that he would never do such a thing. This speaks to a modern concept of intellectual property. He also insists on objectivity: He says you must not criticize somebody’s work because you don’t like them. You have to give your enemies credit and judge them based on their qualities. This speaks absolutely to the modern day.

Today students plagiarize as well. You can pull papers off the Internet, although not yet about classical Arabic literature. Maybe LAL will change that.

Are there other ways you use it in teaching?

One section that is particularly useful is right toward the beginning of the superiority chapter (“The Superiority of Abū Tammām”).

The point of the book is a concerted argument to show how brilliant Abū Tammām is. The more I read the book, and I have been rereading it often, the more I see this as the unified purpose. He does it by bundling many different aspects. In that chapter, there’s a section where he argues that the second-most brilliant poet, [al-Walīd ibn `Ubayd Allāh] al-Buhturī, helped himself to many of Abū Tammām’s ideas. What better argument can there be? And then al-Ṣūlī pairs them, to demonstrate: a line by Abū Tammām, then a line by al-Buhturī.

To escape death had been simple—

but grim resolve and rugged character brought him back to face death.

Had he intended life for himself

He would have found it cheap.

For the students [at Freie Universität Berlin], I decode the image of Abū Tammām’s line. I write it on the blackboard as a graph so they have it all the elements and their connections clear in front of their eyes. Then we read al-Buhturī. By now they understand the image, so they’re implementing what they’ve learned, and then I ask them, Which one do you find better?

That’s a very useful passage for me to teach the poetry. I was surprised how much the students got into it, and I think the repetition element helped.

Did al-Ṣūlī succeed in his goal? Did he prove Abū Tammām’s brilliance?

We shouldn’t give al-Ṣūlī too much credit. He certainly was the first vocal and sophisticated supporter, but he was not the only one, because already in his time, Abū Tammām had become quite famous.

But al-Ṣūlī absolutely succeeded with his project, and if you read any anthology after that, or any poetics after that, citations of Abū Tammām are among the most frequent. My colleague Thomas Bauer recently made a search on the Internet for the most-quoted poet. He asked me, Who do you think? I guessed Mutanabbi. But he said, Nope, it’s Abū Tammām. So apparently, still today, he’s extremely frequently cited, one reason being that he put things in a nutshell, and any poetic anthology that came after is full of quotations from him.

He started to succeed in his lifetime in the early ninth century. But by the end of that century, he was beyond competition, and [the acclaim] hasn’t stopped since.

What were the main stumbling blocks as you translated The Life and Times?

I had sleepless nights over two phrases. One was some black berry. This is tricky, because the comprehensive ancient Arabic dictionaries do not give you botanical information, and the modern ones certainly don’t. There are ancient dictionaries specifically on botany, which I consulted, and there I found an explanation. But then how do you translate this? The tree has no household name in our vocabulary. It exists in North Africa, so I called it the meru berry, using an Anglicized form of the Latin name.

It took some work to render those specific botanical terms. Of course this needs a footnote spelling out what it means: whenever those fruits appear, antelopes and ostriches are nibbling in the shade, conveying a sort of a desert idyll.

Other difficult sections were quick exchanges—brief, funny, maybe obscene, maybe not, among Abū Tammām and his friends. You know, he loved boys. And there were some very short statements where I didn’t know what he was implying.

Obscene poetry is by itself an art form, and I asked two colleagues for advice, but in one case they themselves didn’t know. So what do I do as a translator? I didn’t know either. But my guess is better than another person’s guess, so I made a guess and footnoted the translation as tentative. Later somebody will say: Oh, it means that. Maybe in ten years somebody will solve the secret.

How did you go about translating the sections that were poetry? Was it different from the prose?

Of course. But I should say the prose is not easy either, because it also has certain nuances that need paying attention to, and the style veers between a simple and direct style, more within the book, and a sophisticated rhetoric in the prefatory epistle.

That being said, Abbasid poetry is a coded language. You cannot translate it verbatim, it does not translate nicely. I understand the poetry very well. The challenge—and I liked the challenge—was how to bring this across in modern American English to give it some zizz, some punch.

German philologists are trained to carefully render every single meaning, but then you have a long rattlesnake of a sentence, and it sounds awful. I was in favor of the LAL spirit, to package it densely so it would come across with the same brevity and compactness.

What also helped me greatly, since I’m not a native speaker of English, was to work with an American poet, Dave Brennan. I would go through all of my translations with him.

What was your process?

I have a technique of translating right off the cuff. Then I place several choices in brackets and slashes to leave the translation open. Then at the first rereading I reduce them by a couple, but I leave a number of them standing. I showed my poet my method, and had him choose what to his ear sounded more idiomatic.

I was worried, when the manuscript came back from the last round editing, that it would not have consistency. I had American slang in some places that had been turned into Shakespearean English. Then [LAL executive editor] James [Montgomery] said, It should really be American English. It did end up on the American side of things.

To summarize the whole thing: When you translate poetry, you have to travel a longer distance from the original to the goal, and there are more choices in terms of gearing your translation towards a certain public. That makes it harder, but I think it also makes it more creative.

So I would translate Abbasid poetry into English any time again.

But having a poet-friend to bounce ideas off was central to how you worked.

It really worked, because it gave me the courage to first of all to be more adventurous. It made me translate differently, right from the beginning, because I knew it was for LAL. But then having [Brennan], I considered him my safety net. I could go wildly creative, because if I put something together in English that did not work, I knew he would call me back. I discussed every single verse with him.

I could not have done it without him. It was both a question of trusting myself and a question of double-checking that it sounds right to an English speaker.

« See you tonight in Dubai!
Brains Confounded is named a Recommended Read for 2016! »