A new phase for Arabic literature in the West

When LAL General Editor Philip Kennedy introduced the project’s new paperback series last Thursday at New York City’s Center for Fiction, he marked it as an important event not just in LAL history, but in the history of Arabic literature in the West. In ten years, he said, those in attendance would be able to look back and say “I was there”: 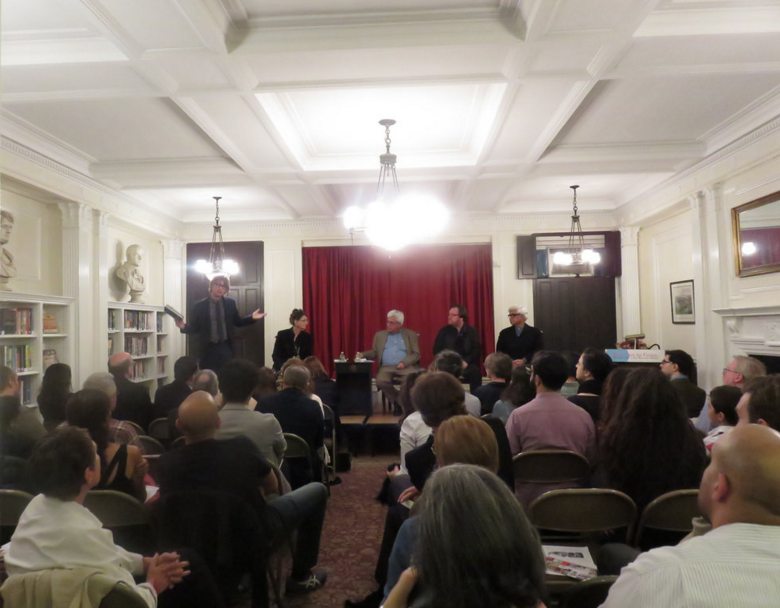 The four texts that Kennedy said will usher in “a new phase in the history of Arabic literature in the West” are two volumes of Aḥmad Fāris al-Shidyāq’s Leg over Leg, translated by Humphrey Davies; al-Shāfiʿī’s The Epistle on Legal Theory, translated by Joseph E. Lowry; and Maʿmar ibn Rāshid’s The Expeditions: An Early Biography of Muḥammad, translated by Sean W. Anthony. The four books come from very different places in the Arabic literary corpus: The first two are an avant-garde fictional narrative from 1855, the third is a complex ninth-century text on legal theory, while the last is a multivocal eighth-century biography of the prophet.

The launch featured a panel discussion that foregrounded, in addition to Kennedy, four novelist-scholars with an interest in Arabic literature: Amitav Ghosh, Sinan Antoon, Elias Khoury, and Marina Warner.

The LAL’s overall mandate, according to General Editor Philip Kennedy, is to fill a “real hole in the world’s culture writ large — to whit the absence of translations of premodern Arabic texts.”

But there are relatively few translations of the rest of premodern Arabic literary production. Even the LAL, which hopes to bring out 70 volumes in bilingual, hardback editions, will scratch only the surface of the broad and deep premodern Arabic corpus. As Ghosh put it, one of the great gaps in the Anglophone literary world “is a sense of the depth of Arabic secular literature.”

Although Ghosh talked about how he—as a bilingual reader—appreciated the LAL’s bilingual editions, this was a night for the English-only paperbacks. While the hardbacks are expensive and heavy, Kennedy called the paperbacks “affordable, available, carryable, readable. Hopefully, this will do something to the field.”

Since its 2012 launch, the LAL’s heavy blue volumes have been largely directed at academic audiences. But the new, attractively jacketed paperbacks are not just for academics, but also for students, readers, writers, historians, journalists, and others.

Sinan Antoon called the paperbacks’ release a “great service in the way Arabo-Islamic literature is studied.” He added that we also have to be mindful that there is “an amazing treasure trove [of Arabic literature] that we’ve only touched the surface of.”

The LAL’s remit begins with the earliest of Arabic literature. It ends more than a millennium later with the region’s nineteenth- and early-twentieth-century nahḍah, or “renaissance” movement, which ushered in many of the literary forms in use in Arabic today. The LAL’s youngest text is thus a compilation of Muḥammad al-Muwayliḥī’s newspaper articles, which became What ʿĪsā ibn Hishām Told Us or, A Period of Time, first published in book form in 1907 (published by LAL in two volumes, Volume One and Volume Two.) The second-youngest is al-Shidyāq’s Leg over Leg (1855).

During the Thursday-night event, there was almost no discussion of the paperback series’ two older texts: the al-Shāfiʿī and the Maʿmar ibn Rāshid. As is usual when al-Shidyāq noses onto the stage, most of the attention was focused on the virtuosic Lebanese stylist, humorist, and humanist. Several of the speakers hoped that, through al-Shidyāq, the LAL could shake up thinking about the nature of nahḍah and modernity.

One of the problems with current conceptualizations of the nahḍah, Kennedy said, is that “people think that the nahḍah was a renaissance based on European models.” Like “modernity,” it is too-often associated with an imitation of Western forms.

Because of this mistaken view, Kennedy said, “anything that was a product of the nahḍah in the Arab world was [seen as] derivative. Whereas Aḥmad Fāris al-Shidyāq shows is that the nahḍah is not.”

Al-Shidyāq’s multi-versal Leg over Leg stretches over four main sections and explores both Lebanon and the world. An ostensible autobiography, it is sometimes likened to Tristam Shandy. Indeed, al-Shidyāq was aware of work by Laurence Sterne and other major European authors. But much of his innovation came through looking not to Europeans, but back at classical Arabic language. The nineteenth-century author, Kennedy said, was “looking back at the roots of the Arabic language in order to make it modern.”

It isn’t just Anglophone readers who have ignored al-Shidyāq’s signature work. The author also must be more widely read in Arabic, Khoury said, although “he’s outside any curriculum of modern Arabic literature. We begin modern literature with Mohamed Husayn Haykal and Khalil Gibran, and the Prophet, and all these stupidities, whereas the real modernism is here with Shidyāq.”

Antoon added that belief in a Western-focused modernity complicates the relationships many contemporary Arab writers have with their own literary pasts. For that reason, Antoon said, “I am especially happy about the al-Shidyāq [focus], because that moves us closer to that problematic phase in which all of these complications take place.”

Antoon further hoped that the LAL’s Leg over Leg volumes would mark a new movement of “publishing the premodern but also publishing the modern as well, the classics of modern Arabic literature.” Khoury agreed, particularly suggesting the need to translate poetry of 1930s Lebanon and Syria and the works of Badr al-Shākir al-Sayyāb.

…and into to readers’ hands

Antoon, like the other speakers, applauded the LAL translations. And yet, he said, no matter how good these translations are, “when these books come out into the Anglophone world they’re going to be filtered by the usual filters.”

The Library of Arabic Literature is often likened to the Loeb Classical Library, which aims to give English-language access to “all that is important in Greek and Latin Literature.” But the Loeb series is different for a number of reasons. First, the Loeb can bring out nearly all major Greek and Latin texts. Meanwhile, as LAL Executive Editor Shawkat Toorawa noted last spring, “We could never even publish all of Ibn al-Jawzī if we wanted.”

Also, the Loeb classics are published into a context where they’re understood as a shared global legacy. There is, Antoon said at Thursday’s event, a wealth of modern literature in the same tradition.

Pre-modern Arabic literature, however, doesn’t have that luxury. In order to really read the LAL books, Antoon said, “the genealogy has to be completely changed. As great as these translations are, unless one has a narrative that puts all these on the shelves, they will not mean the same thing.”

When asked how LAL planned to get these paperbacks out into readers’ hands, LAL General Editor Philip Kennedy said that the LAL was “conscious of this being a twenty-first century project rather than a twentieth century one,” noting that the book series also had an online presence, which also offers online extras and—among other things—a free e-book of One Hundred Proverbs, attributed to al-Jāḥiẓ, available in both ePub and MOBI/Kindle formats.

« “No translation is ever finished”: An interview with Roger Allen on translating al-Muwaylihi
The first great Arabic novel »