A comparative balancing act: Arabic literature is from Mars, English literature from Venus 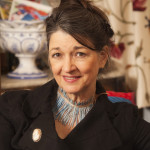 The third session of “A Corpus Not a Canon: A Workshop on the Library of Arabic Literature,” a panel series hosted by Dame Marina Warner and LAL General Editor Philip Kennedy at All Souls College, Oxford, in April, focused on “LAL’s importance to comparative literature and ways of reading.” Marina Warner led a discussion that included comparativists Dominique Jullien, Ros Ballaster, LAL International Advisory Board member Wen-chin Ouyang, and Matthew Reynolds. The books in focus were The Epistle of Forgiveness, by Abū l-ʿAlāʾ al-Maʿarrī, edited and translated by Geert Jan Van Gelder and Gregor Schoeler; and The Principles of Sufism, by ʿĀʾishah al-Bāʿūniyyah, edited and translated by Th. Emil Homerin.

As we started the third session of the Library of Arabic Literature’s April workshop, Marina Warner reminded participants of the difficulty of the task at hand.

In the workshop’s second session, speakers explored the wide range of literary modes and genres that are brought together inside the LAL’s blue jacket. Although these genres overlap with those from other traditions, Warner noted there is still “no easy way” of comparing the distinct literary genres and values of “one cultural language with another.”

Moreover, the texts in focus during the third session aren’t the simplest ones to approach as a contemporary Anglophone reader. The writing explored in the second session would have made an easier entry point, as Two Travel Books reads enough like contemporary Anglophone travel writing, and Ibn al-Sa’ī’s Consorts of the Caliphs may not be thirteenth-century gossip writing, but it can be read that way.

By contrast, Abū l-ʿAlāʾ al-Maʿarrī’s The Epistle of Forgiveness and ʿĀʾishah al-Bāʿūnīyah’s The Principles of Sufism require placing oneself in a different framework of literary expectations.

Nonetheless, both Matthew Reynolds (who focused on The Epistle) and Ros Ballaster (who focused on The Principles) found interesting points of overlap and tension between their chosen volumes and Western texts. But UCLA comparativist Dominique Jullien, who discussed how the texts would float in the classroom, was less enthusiastic.

“Seen from the point of view of not just the California student, this is literature from Mars,” Jullien said. “It is absolutely and radically alien.”

The Epistle and the Commedia

While acknowledging that previous scholars had been wrong in tracing a direct line of descent between al-Maʿarrī’s Epistle and Dante’s Divina Commedia, Reynolds and Jullien nonetheless found that links between the two works were fruitful.

For Jullien, situating The Epistle vis-a-vis the Commedia was essential, and “despite the inaccuracies,” she felt it was important to talk about al-Maʿarrī as “the Arab Dante.” Or, if one wanted to make the link less normalizing of a European center and Arab periphery, one might call him Dante’s older step-brother.

As Jullien saw it, bits and pieces of The Epistle could be wedged within a comparative course that focused mostly on classical European works. She suggested a course on eschatological tourism, which “in addition to the usual suspects—The Odyssey, The Aeneid, and The Commedia—would have some excerpts by al-Maʿarrī.”

Reynolds, by contrast, was far more excited about The Epistle on its own terms. He first confessed that he had no knowledge of Arabic literature, even in translation, but said of The Epistle: “The good news is, I loved it.”

“It was something new for me, aesthetically,” Reynolds said, noting how different reading this was from reading a text in the European tradition. “You get these conversations that you would expect to be dry, but in fact have tremendous energy behind them. It’s satirical, but it’s also a warm presentation of this character. This is a guy who loves poetry. He loves poetry so much that he’s almost unbearably boring about it. But being boring about it is also kind of admirable, and kind of enjoyable.”

Reynolds went on to give a lively reading from the text, and his manner of reading—with emphases laid on particular phrases—was a sort of comparativism in itself.

When Reynolds moved on to what a comparativist could do with the text, he also tracked back to Dante’s Commedia. Reynolds was most interested in how The Epistle treated textual transmission and error, and in the differing ways poets are imagined in The Commedia and The Epistle.

“In Dante’s imagining of how poetry would figure in the afterlife, you have this conjuring of an idea of utterance, of a body of work, and a turning of that work into a figure who can speak with authority in the afterlife,” Reynolds said. “But there’s nothing really about misunderstanding and error and textual transmission—and the works having varied as they’ve been recited in different ways. Whereas in this text [The Epistle], that’s where the interest is. Their relationship to their writing is quite different.”

Indeed, it’s tempting to see Dante as having a pre-modern or modern view of textual authority, while al-Maʿarrī’s is decidedly post-modern.

But Reynolds was quick to question the connections he’d made. “On the one hand, the text is appealing to me, and I’m finding something in it that speaks me to. But on the other hand, because I don’t have the right scholarly knowledge, I’m a bit uneasy with this recognition that I have,” he said.

“My imaginative involvement with the text has a value, but it needs to be rebutted as well.”

The Principles of Sufism and Christian female mystics

Oxford scholar of English literature Ros Ballaster also engaged imaginatively with ʿĀʾishah al-Bāʿūniyyah’s The Principles of Sufism, noting that she “thought immediately of the kind of mysticism in the prophetic writings and speech of Christian women…the medieval mystics in Europe.”

Ballaster found a particular resonance between sixteenth-century al-Bāʿūniyyah and the work of seventeenth-century English author Anna Trapnell, seeing in both “an identity that has been set alight through an encounter with the divine,” and in both an attempt “to ignite that audience as well.”

In Ballaster’s view, al-Bāʿūniyyah was less focused on her personal journey than the Christian women mystics. There is almost no mention of al-Bāʿūniyyah’s femaleness in the text, and “there’s no biographical information, no self-reference. In this respect, it reads more like what I would recognize as a conduct book or an instructional work than a spiritual biography of a mystic experience.”

While searching for a section “that gave me ʿĀʾishah’s voice, or her poetry,” Ballaster found such a thing wasn’t easy to find. The mode of writing as re-representation, Ballaster said, felt very different from a contemporary Anglo-European understanding of creativity. This, she noted, could help us shift our ideas of what “creativity” meant in writing.

The fact that al-Bāʿūniyyah didn’t lay emphasis on her gender also had another interest for Ballaster, who noted that the author doesn’t “show any particular sense that the male experts she cites have any more authority than she does. She evidences none of that kind of uncomfortable struggle that I see in Christian women’s mystic writing with male priests and authority figures.”

“There’s much to celebrate in reading a woman’s unproblematic demonstration of her learning,” Ballaster said. “Which is not something I encounter often in the European texts I read.”

Ballaster had some anxiety about reading the text in translation, as it meant she wasn’t able to see “patterns of language that might be visual or sonic.” To her, the poetry read “startlingly like free verse,” although Ballaster knew from the accompanying materials that this reflected the translator’s decisions rather than a lack of strict poetic conventions in the Arabic.

Ballaster added that she connected to some of the text’s more physical metaphors, such as “repentance is a fire in the heart and a rift that never mends” while expressing anxiety that these metaphors might be considered tired or overused in the Arabic tradition.

‘The Arab St. Theresa of Avila, for example’

Each of the panel members had different approaches to what “comparativism” meant when reading these texts, which raised the question: How should (and shouldn’t) non-Arabists approach LAL texts? What sort of local, temporal, or global contexts make for vivid, productive, and enjoyable reading? How should the feeling of a connection—or the lack of a connection—be interrogated?

Jullien felt that making strong links to the European tradition was “an indispensable way in to these texts…if the non-specialist Western reader is to connect in any deep way with these books.” While calling al-Maʿarrī “the Arab Dante,” she referred to al-Bāʿūniyyah as “the Arab St. Theresa of Avila, for example,” and insisted “despite the inaccuracies, that we actually take this sort of thing seriously.”

Jullien felt we must “triangulate Dante and al-Maʿarrī …to inject some relatability into the foreign, into the impenetrability. It really helps.”

Later discussion among workshop participants focused on whether Dante really created an access point for contemporary students, with Sajjad Rizvi suggesting that students were more likely to relate to more contemporary books or films. Al-Bāʿūniyyah’s work could potentially rub up against other spiritual guides, including self-help books, and al-Maʿarrī, as Reynolds noted, with post-modern questionings of textual transmission. Or, to create a different sort of context, Al-Bāʿūniyyah’s spiritual guidebook could be read in the context of her own collection of poetry, Emanations of Grace.

Reynolds’ and Ballaster’s anxieties also point to how it might be productive for comparativist readers to de-center themselves and their own literary traditions.

Wen-chin Ouyang, who was the only speaker on the panel who was also an Arabist, talked about living both inside and outside the Arabic tradition. She echoed what Reynolds found interesting in The Epistle, noting that “there is already,” in the Arabic tradition, “theorizing about reading and modes of writing. And that is a very productive site of thinking more about how to read classical Arabic literature.”

Ouyang also didn’t want us to forget that we were supposed to be enjoying these texts, and this sometimes means letting ourselves flow along with the writer: “There is pleasure of the text, and that pleasure derives…from drifting and not sticking to the point.”