Geert Jan van Gelder was Laudian Professor of Arabic at the University of Oxford from 1998 to 2012. He has written several books on classical Arabic literature in addition to translating classical Arabic poetry and prose into Dutch and into English. He has translated and edited two volumes for the Library of Arabic Literature thus far: A Library of Arabic Literature Anthology, the first book brought out by LAL, and the Epistle of Forgiveness Volume One: A Vision of Heaven and Hell, which he worked on with Gregor Schoeler.

Van Gelder and M. Lynx Qualey discussed, over email, why poetry should come first, “the most enjoyable poet in Arabic” (Abu Nuwas), why both Van Gelder’s admiration for and irritation with al-Ma‘arri have deepened, and why translating Arabic poetry is better than sudoku. 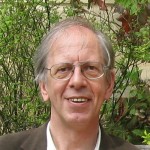 What brought you to translating poetry?

Translation is one of the best ways of understanding a text. I suspect that many Arabs reading classical poems—or native English speakers reading difficult English poems—often think they understand them. But if they were questioned in detail, they would have to confess ignorance of what they thought they understood. Classical Arabic poetry, for me, apart from being beautiful, offers plenty of puzzles, far more interesting than sudoku or crosswords or whatever. Translation is not an exact science, and one needs to make compromises all the time; this subtle art appeals to me. Moreover, I want others to share in my pleasure.

What guiding criteria did you use in selecting particular poems and prose excerpts, beyond that they be “literary”? Were the criteria different when you used it as a text at Oxford vs. when you expanded it for the LAL?

Actually, only a small portion of the anthology, some 60 pages, were used in class in Oxford, to enable beginners to get an overview of what Arabic had to offer in terms of literature. My choice of these excerpts, and subsequently of the Anthology as a whole, was purely personal. These are mostly texts that appealed to me for one reason or another, and some thrown in for the sake of making a more-or-less balanced whole.

Why, for instance, the (delightful) passage by al-Jahiz on flies instead of on something a bit more “serious”?

You thought the long chapter on flies was “unserious”? The whole point of al-Jahiz is precisely that lowly creatures and subjects are in fact extremely serious, pointing as they do to God’s providence and the wonders of nature just as much as loftier topics. Well, I may not have quite the same view as he, but I think that “mixtures of jest and earnest,” to quote the title of an article I once wrote, are important and illuminating. Here again I concur with al-Jahiz.

How did you decide on their organization?

At an early stage, I decided to follow traditional Arabic literary views in strictly separating poetry and prose—although in the prose section there are many quotations from poetry. Poetry should come first, for it is always older, in Arabic, than literary prose. Within the two main sections, I more or less followed a chronological order.

Did you have particular theories that developed as you worked on the translation, “rules” that you began with or that appeared through the process?

I don’t do theories, at least not consciously (theorophiles tell me that one always follows one). Only practices.

I strongly believe one should stay as close to the original language as is tolerable. I admit that what readers can tolerate in this respect differs widely. I also believe in the necessity of annotation. A pity that footnotes were not allowed.

Translating poetry forces one to make a choice. A crib would have been very useful for students of Arabic, but virtually unreadable for the non-specialist reader. I wanted to reach non-specialists and specialists alike. In poetry, sound and form are essential, so I had to shape the texts as poems.

I happen to dislike non-metrical verse, in general. All classical Arabic verse has a meter and a rhyme; ideally, a translation should also use rhyme. But doing this consistently for Arabic, even if you replace “monorhyme” with aabbcc and so forth, implies many sacrifices and I have used it only rarely, especially for “light” verse, where the English tradition demands rhyme. But for serious poetry, you can also use blank verse—metrical but without rhyme—for which there is a tradition in English.

Was your process different with the verse vs. the prose?

As for that typically Arabic form, rhymed prose, I have imitated it in English in a number of pieces, for one robs the text of something essential if by omitting the rhyme. It was a risk, I know. Both in Holland and in the English-speaking world, I have experienced doubts among non-Arabist readers. I feel comforted by the fact that I am not alone; Humphrey Davies uses rhymed prose in his translations, and so do others. 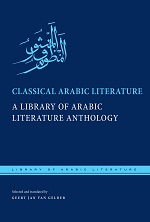 When I first read the Library of Arabic Literature Anthology last year, I noticed that you wrote that the translations can be “informative, entertaining, and perhaps even enjoyable not only as curiosities but as examples of genuine works of literary art.” Why the “perhaps even”?

When I read translations from foreign languages and cultures, for instance Sanskrit or Chinese, I may find the texts “informative,” “entertaining,” and “curious” without actually finding them “beautiful” or being moved by them. In fact, I can say the same about Arabic. Sometimes, I even suspect myself: Do I like this poem because it moves me, or merely because, for once, I actually understand it and enjoy having solved the puzzle, a mere intellectual enjoyment? I usually do not stop to answer the question. Enjoying good poetry is often a mixture of intellectual, aesthetic, and emotional appreciation.

You write that the translations are not meant to be “poetic recreations” that turn the poems into modern English poetry and thus “betray the original.” You don’t think there is a role for that sort of translation?

There has been a tremendously important role of this kind of translation. Homer, Ovid, Omar Khayyam, Hafez and countless other poets have inspired high-quality “recreations” in English and other languages that have been sources of endless inspiration to others. If translators would like to continue to do so with classical Arabic, let them, if publishers and readers like it. But I don’t, in this age.

How do you work to “transport the reader to the time and place of the author”? By the introductions and footnotes? Elsewise?

Introduction, and lovely footnotes, yes—unfortunately demoted to endnotes in LAL. But more importantly, by the translations themselves, using an “exoticizing” technique rather than always giving equivalents. Thus, it’s “if God wills” instead of “perhaps.” Or  “Let the one in the grave alone” instead of what in English would perhaps be “Speak no ill of the dead” or, if one has had an old-fashioned education, “De mortuis nil nisi bene”.

What did you want to change about how predecessors like Nicholson and Arberry translated? How do you see your guiding light as different from theirs?

I don’t want to change their translations; both produced good versions in many instances. But they lived two or three generations before me, and I expect that after two or three generations my own versions will look quaint, if they don’t already. Here is how Arberry translated a line from a love poem by Ibn Hazm in his The Ring of the Dove (1953):

Long she denied my heart’s desire,

Then ah! so ardent kisses pressed

Upon my lips, that all the fire

Of love rekindled in my breast.